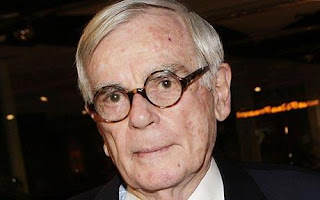 Dominick Dunne, American writer and investigative journalist, died Wednesday, August 26 at his home in New York City, after a long battle with bladder cancer. He frequently examined the relationship between high society and the judicial system. He was successful both as a television and Hollywood film producer and a writer.

Dunne was born on October 29, 1925 in Hartford Connecticut. He was known to childhood friends as Nick and grew up one of six children of a wealthy Connecticut surgeon. His brother was the author John Gregory Dunne. He was the father of actors Griffin Dunne and Dominique Dunne. He began working in show business around 1950, as a stage manager for The Howdy Doody Show. He eventually met many actors including Paul Newman, Steve McQueen and Warren Beatty whose photographs, along with hundreds of other pictures, according to People, filled "a stack of scrapbooks four feet high."
Dominick Dunne battled drugs and alcohol for years as a Hollywood film producer in the late 1970's. Dunne turned to novel writing and wrote five best-selling novels focusing on scandal and high society crime. His best known novels are The Two Mrs. Grenvilles, People Like Us, and An Inconvenient Woman.
The Two Mrs. Grenvilles was based on the actual killing of millionaire William Woodward by his wife in 1955. In the book, showgirl Ann Arden kills her millionaire husband after she is unable to gain sufficient respect in the elite social circle. People Like Us examined the manners and values of 1980's high society. An Inconvenient Woman focuses on an affair between married Jules Mendelson, a member of the Los Angeles elite social circle, and Flo March, a waitress and aspiring actress.
Dunne covered the trials of O.J. Simpson, Michael Skakel, William Kennedy Smith and the Menendez brothers. In March 1984, Dominicks' first major piece for Vanity Fair appeared which covered the trial of the man who murdered Dunne's actress daughter. He later began writing regularly for Vanity Fair. The essay, "Justice: A Father's Account of the Trial of His Daughter's Killer" was published as well as a piece documenting the trial of Eric and Lyle Menendez, two brothers convicted of the 1989 shotgun murders of their parents. Vanity Fair magazine also published profiles of Imelda Marcos, Elizabeth Taylor and Gloria Vanderbilt.

In September 2008, Dunne revealed that he was being treated for bladder cancer. Throughout his life, he completed 10 books, including five best-selling novels and two collections of essays. He was working on his final novel, Too Much Money, at the time of his death. His last novel will be due in stores in December.
Dominick Dunne is survived by his two sons, Griffin and Alex Dunne, and his granddaughter, Hannah. Dunne will be greatly missed.
By Leslie Deason