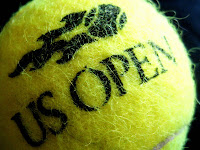 The US Open starts in the Big Apple on Monday. This has been a very interesting tennis season and I can’t wait to see who emerges from the tournament with the trophy. Rafael Nadal took a break after his Wimbledon victory so he could be healthy for the hard court season. He didn’t get a chance to play in the Open last year due to injury, so he is hungry to win the Grand Slam title that has eluded him so far. He is also the French Open champion, so if he wins at Flushing Meadows, he will have 3 of 4 Grand Slam victories this season.

This summer, there has been a lot of speculation about whether Roger Federer’s best days are behind him. Since he only won one Grand Slam this year (Australian Open), people are talking like his career is over. Anyone who writes off Roger Federer will be doing it at his own risk. He lost the final to Andy Murray at the Rogers Cup in Toronto (5-7,5-7), but he played a tough match against Mardy Fish in Cincinnati. Neither could break the other’s serve until the third set when Federer broke serve to go up 5-4. It was all over then and he went on to beat Fish 6-7(5), 7-6(1), 6-4 at the Western & Southern Financial Group Masters Tournament.

You have to start any discussion of men’s tennis with Nadal and Federer but you can’t count out the Americans at the US Open. Mardy Fish had a great summer in the US Open Series. He won the Atlanta Tennis Championship and as I stated above, played a tough match against Federer in Cincinnati. Andy Roddick is another name to keep in mind. He made it to the quarterfinal in Atlanta and the semifinal in Cincinnati, so I’m sure he’s anxious to compete in another Grand Slam final. Grab your tennis rackets, flip on the TV and get ready for some great tennis.
By G. Jones