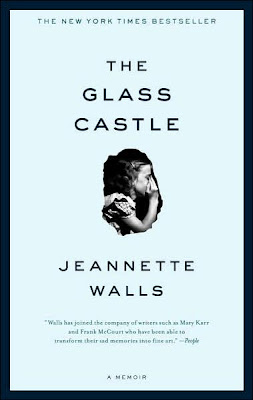 Recently I’ve read two of the bigger kahuna memoirs that have stood out in the ongoing memoir publishing trend. The first was Running With Scissors; the second is The Glass Castle. I wrote a piece on Running for the library’s Season’s Readings, a booklet containing write-ups from the staff on their favorite books of the year. The trope for the bigger-selling memoirs is a dysfunctional family; in fact it seems that the more broken the family is, the more the memoir sells. Memoirists have been accused of competing with each other to see who can put the sickest family between covers. But of course the family must be more than merely unhappy. They have to be captivatingly presented by the author, and there needs to be judicious humor to leaven the onslaught of tragedy. Avoiding exploitation is also recommended. Both these books succeed in all of the above, but you’re probably wondering, “Yeah, but which family’s the craziest?” You’ll get no such satisfaction here. It isn’t really fair to compare because the protagonist in Running With Scissors, though he does come from a nuts family, gets unceremoniously dumped on another family and that’s where he spends most of the book. Whereas the protagonist (and all the kahuna memoirs have a protagonist) of The Glass Castle stays with her birth family throughout almost the entire story.

And good God, what a narrative. To simply call Walls’ family (which is to say, her parents-the kids are basically innocent pedestrians) dysfunctional would be a pathetic understatement. The book opens with Mom offering wise counsel: “You can’t live in fear of something as basic as fire.” Dad show Jeannette the practical application, and soon she is, like a good girl, sticking her hand in the fire. The dad is Rex Walls, a thoroughgoing screw-up and an advanced alcoholic who can’t keep a job for more than a few weeks. The family thus bounces from one fly-blown desert town to another. It’s the early sixties. Dad won’t work much but will drink; Mom (Rose Mary) won’t work hardly ever but will paint (marketing herself is out of the question); the kids have almost nil supervision. If Jeannette Walls parents had been a bit more middle class, if they’d been a bit more functional, if the events herein had happened a few years later, they might have been hippies. Or gotten grandfathered in. But they’re just too singular, an extraterrestrial heterosexual couple’s idea of how to be American parents.

Mom wants a piano. Rex goes and gets one from a bankrupt saloon, brings it home, builds a ramp for it, rolls it into the house and it sails on through, ending up in the backyard (or back desert). No worries. Mom: “Most pianists never get the chance to play in the great out-of-doors. And now the whole neighborhood can enjoy the music, too.” This is in Battle Mountain, the most memorable of the fly-blowns, a Nevada mining town where no one’s striking it rich anymore. Walls’ picture of the desert is evocative, Southwestern Gothic: “You could find the sun-parched skulls of coyotes and empty tortoise shells…And you could find great big bullfrogs that had stayed in the sun too long and were completely dried up and as light as a piece of paper.” Rex thinks it’s a fine place to bring up a family. He prefigures today’s talk radio blowhards: “We’re becoming a nation of sissies.” But his macho bluster is a cover for his alcoholism, and he’s off on benders for days, weeks. The kids do more experimenting, throwing lit matches into bottles of poison they find at one of their favorite playgrounds, the city dump. No results for awhile until the payoff comes for Jeannette one day: “When I tossed in the match, a cone of flame shot up with a whoosh like a jet afterburner.” At least the children weren’t Safety Nazis. Rose Mary toughens the kids up, too and demonstrates the value of ecosystems to boot:

So mix some maternal crackpot Gandhism in with Dad’s macho survivalism. The core value both parents shared was No Coddling. No doctors, no dentists, no structured social life, no rules. The family stumbles along, falling down frequently. When the money bottoms out, Mom takes a job as a schoolteacher. It’s short-lived, due to her unconventional teaching style: “Mom was up front, spinning like a top and letting pieces of chalk fly from her hands to demonstrate centrifugal force.” Between Rex and Rose Mary, do the Walls children have a shred of a prayer? They are surprisingly resilient and emotionally tough. But the damage is real and the kids grow up in defiance of, in spite of, berserker parenting. Defiance aside, Rex and Mom do their best to destroy things, letting Christmas trees have a bit of fire, letting cars break down in the desert, leaving all locks unlocked, providing rotten food for dinner.

When one more financial calamity (in a seemingly endless string) happens, it’s back home to Welch, West Virginia, Rex’s hometown. Collapsing grandparents give the reader some clue as to Rex’s wrecked perspective. For awhile, Dad and Mom dump the kids on the relatives. Then it’s onto the holler house Rex snags:

The house was a dinky thing perched high up off the road on a hillside so steep that only the back of the house rested on the ground. The front, including a drooping porch, jutted precariously into the air, supported by tall, spindly cinder-block pillars. It had been painted white a long time ago, but the paint, where it hadn’t peeled off altogether, had turned a dismal gray.

No toilet, no running water, no heat, no a/c. And rats. But Dad’s thrilled because it’s a bargain at $50 dollars a month. And this fixer-upper has potential. Rex:” I’d rather have a yard filled with genuine garbage than with trashy lawn ornaments.”

Jeannette Walls’ tone is strictly even-tempered, unhysterical, nonjudgmental. Perhaps this is the means that allows her to contain the emotional insanity that formed her. The absolute lack of rancor, recrimination or self-pity is something of a miracle and a large part of why the book is so successful. It is a subtle style and a winning one. Walls doesn’t telegraph or draw attention to anything; she wisely realized the unadulterated story was inherently dramatic and needed to be frill-free. In one scene the family suffers through a Welch winter night without heat: “We all huddled around the potbellied stove, wrapped in blankets, holding out our hands toward the weak smoky heat.” The Bob Cratchit allusion is there, almost invisible. It is the same with the whole book.

It’s not so much the hidden injuries of class that are included here; it’s those that are right out in the open. The family’s shunned, yelled at, insulted. They suffer mightily, visibly. So it’s hard to explain that the book is extremely funny, too. A lot of it made me laugh uncontrollably. The jet afterburner scene was one, with its Wile E. Coyote thing. Here’s another: “When Mom mentioned Jackson Pollock once, Lucy Jo said that she had Polish blood and therefore did not appreciate Mom using derogatory names for Polish people.” As the above instances would suggest, there are scores of indelible vignettes strewn around. In the early seventies, for instance, Jeannette’s half-dollar shoes were in such tatters she had them fastened together with safety pins. She was punk before punk. There are many various and contradictory tones going on in the flux of this book, but they all are somehow in balance.

In the final section, the family transitions slowly to New York City. Jeannette scrounges as a journalist. Rex and Mom have an exciting and fulfilling career as homeless persons. The other kids get jobs, scrape by, hunker down. Things, rather miraculously, turn out ok. Perhaps I’ve conveyed a fraction of the kaleidoscopic craziness of The Glass Castle. It’s a marvel of a memoir. The unhousebroken events are delivered in a literary, restrained framework. Rex never gets to build his dream house which is the Glass Castle of the title. But his daughter has, with her style, her compassion and her all, left us an account that stands admirably well despite the anarchy that would overthrow most troubled lives: a sort of Glass Castle indeed.