Book Review: The Watch That Ends the Night 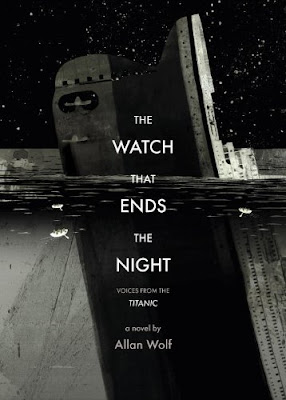 Simply put, The Watch That Ends the Night: Voices from the Titanic by Allan Wolf is one of the best books I've read all year. Written in verse, it is the story of the Titanic from its launch to its sinking, told in twenty-four different voices, including those of third class passengers, first class passengers, crew, and even the iceberg. We learn of the hopes of young third class teens, the desperation of a second class father, the con artist in first class, the valiant musicians, and the new Marconi wireman, plus many more; with the exception of only one, all were real passengers aboard the ship, and all were changed forever when destiny met a silent, waiting iceberg in the dark of the ocean.

Creative and captivating, Mr. Wolf keeps the action steady as the stories of the passengers race toward a struggle with life and death. I was equally enthralled with young Frankie Goldsmith's ice dragon adventures as I was with Captain Smith's realization that this final voyage would not be to his anticipated retirement. Wolf's research is detectable in all his details, and this Titanic buff was pleased to read his illuminating author's note in the final pages. I could easily have inhaled this novel in one long breath, but I made myself savor each word, right down to the lines falling off the pages as Thomas Andrews takes his final plunge with the ship. As 2012 is the centenary of the sinking of the great ship, there will doubtless be lots of information and many books available, but this one should definitely be the one literature and history lovers should seek out. Highly, highly recommended.

Anonymous said…
Thank you for showcasing my book trailer! I hope everyone enjoys the book!
~K. Seholm
9:16 PM