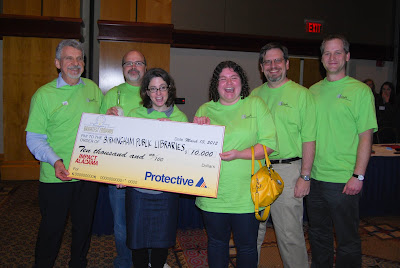 The Friends of the Birmingham Public Library are tremendously excited about the award. “We are delighted to support the library in this competition. It was a win-win all around—helping to support the great work of Impact Alabama, as well as an opportunity to highlight the resources and knowledge of the BPL staff,” stated Friends’ President Pat Rumore. The funds will enable the Friends to continue providing resources for some of the library’s special needs with programs such as ‘Beyond the Budget,’ which funds proposals from the library staff for resources that are outside of the operating budget,” continued Rumore. Most recently this program has provided funding for eBook staff training and equipment in the Circulation Department, and the restoration of maps in the Southern History Department.

To earn a spot on the six-person team, the library held tryouts. Team members included Tobin Cataldo, Danny Dorroh, Jaclyn Hogan, Jared Millet, Mary Beth Newbill, and retiree Jim Pate. The alternates were Lynn Carpenter, Barry Crane, Katie Elkins, and Jennifer Neely. “I am so proud of our team effort. We worked together very well, collaborating on all of the answers. In addition to the six of us who responded to the questions, there was tremendous support from our BPL colleagues behind the scenes,” shared Mary Beth Newbill, who was the scribe during the competition.

The Birmingham Public Library is a community partner hosting the Impact Alabama Save First program at the Smithfield, West End, and Woodlawn branch libraries. The BPL system has provided space for the program for more than five years. Save First, a service learning project, provides individuals with income tax help free of charge using college student volunteers. Visit BPL's Tax Forms and Assistance page for more information.
By Tressa Fancher