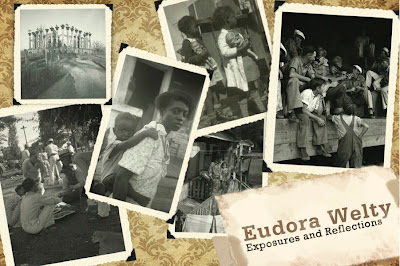 Eudora Welty–Exposures and Reflections will be on display in the Fourth Floor Gallery at the Central Branch through Friday, July 20.

About the exhibit:
Eudora Welty has long been recognized as one of the great Southern literary voices of the twentieth century. However, many Americans do not know of her amazing work as a photographer. During her time as a junior publicist for the Works Progress Administration, Welty photographed the effects of the Great Depression on her native South. The exhibit opens in the Fourth Floor Exhibition Gallery at the Central Branch on Tuesday, June 5, and runs through Friday, July 20.

Welty insisted that her writing and her photography were separate art forms, and that neither influenced the other. But Eudora Welty—Exposures and Reflections explores a unique relationship between her written words and photographic images, a relationship that exists despite Welty's assertion to the contrary. Using 40 photographs and excerpts from various Welty short stories and novels, the exhibit is a first effort to create a stronger tie between the two art forms so as to more fully explore these photographic images in reference to her complex written works. It is Welty, in her own words, describing the images put before the visitor to this exhibit.

Developed in partnership with The Southern Literary Trail and funded by Alabama Humanities Foundation, the exhibit is the first traveling exhibit designed by the Museum of Mobile.
By Tressa Fancher