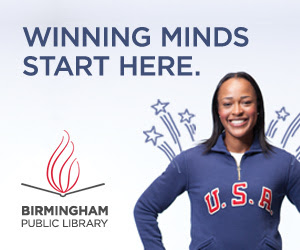 The Birmingham Public Library (BPL) and Olympic gold medalist Vonetta Flowers are partnering to increase awareness of the value of the library to the community. Flowers will star in a “Champions for Learning” awareness campaign set to launch July 27 as the 2012 Summer Olympics get underway.

Flowers, a Birmingham native, volunteered her time to record public service announcements during a recent visit to Birmingham. In a thirty second television ad, Flowers speaks of the impact the Birmingham Public Library had on her life as a child and about her unexpected launch into a successful bobsledding career. Other elements of the campaign include posters and print ads, all encouraging area residents to visit their local library. The campaign runs through August.

“The Birmingham Public Library has been in the community for 125 years serving not only as a free resource, but also as a champion for lifelong learning,” said Library Director Irene Blalock. “Because she is also a champion, we could think of no better partner for this initiative than Vonetta Flowers. We are so grateful that she contributed her time to being part of this initiative.”

Birmingham’s public libraries have a strong presence in the community that will be enhanced by this effort. Last year alone the libraries served 2 million people. And 50,000 books were read by youth participating in the summer reading programs that take place at various branches.

This campaign launch comes on the heels of the new logo design slated to be unveiled officially on August 1. The new logo is a variation of the enduring flame of knowledge and speaks to exactly what the library represents as a community organization that provides educational and entertainment opportunities at its 19 branch libraries. Naturally, reading is the main association that most have with the library. So books remain a focus for the organization’s image.

“Champions for Learning,” which came to life through the spirit of cooperation, is the brainchild of Big Communications who were behind the idea to involve Flowers and secured her participation. The agency also developed the creative elements associated with the campaign.

“As an agency, we seek opportunities that allow us to give back to Birmingham using the creative abilities of our team,” said John Montgomery, Big Communications president. “We look to create synergy between clients and friends of Big, especially when we can improve our community by making those connections. Vonetta Flowers’ participation in this campaign is the perfect example of that.”

Six Branding & Design created the new logo pro bono for BPL. This young addition to Birmingham’s marketing communications landscape is comprised of recent graduates from the University of Alabama at Birmingham.

“We are proud to use our abilities to benefit an organization that enhances the minds in our community daily,” said Jacinta Elliot of Six Branding & Design. “Our spirited minds came together with the common goal of making a difference in the community through our passion for design. Our team has spent countless hours in Birmingham’s libraries. So we were indebted to them before this project even came to life. It is awesome to give back to an organization that already does so much.”

In addition to the contributions by Big and Six Branding & Design, Six Foot Five Productions provided the production services at no cost. Media outlets donated airtime to run the TV PSA and space for the print ads.

Blalock said, “Birmingham public libraries have immeasurable amounts of resources to support learning. In contrast, our resources for marketing are quite limited. Without the kind contributions from Birmingham’s creative community, this campaign truly would not have been possible.”

This effort, to which many have contributed both their time and financial support, will be the message around which all BPL followers rally in 2012 and beyond.