Book Review: Rise of the Robots: Technology and the Threat of a Jobless Future 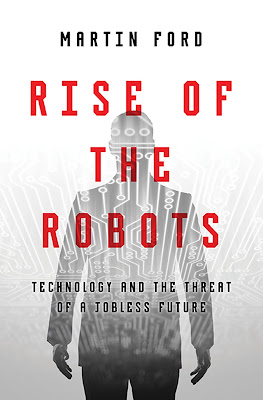 Rise of the Robots
Martin Ford

2. A robot must obey orders given it by human beings except where such orders would conflict with the First Law.

3. A robot must protect its own existence as long as such protection does not conflict with the First or Second Law.

Such a melodramatic title. It sounds like pulp tale from the golden age of science fiction. I can’t help but picture a stiff-legged, iron behemoth lumbering toward a helpless, screaming blonde. But Martin Ford hasn’t written a science fiction novel. In fact, he hasn’t even written a novel. Rise of the Robots is an economic analysis of the increased use of robotics, automation, and algorithms in the workplace. Still, the conclusions he draws are just as frightening as watching The Day the Earth Stood Still, and one walks away from the book wondering if humans are already being harmed by robots.

Job obsolescence from scientific progress is, of course, nothing new. I can only imagine how the invention and mass production of the automobile rippled through the early 20th century American economy. Saddle makers and farriers may have been the first to feel the effects, but they were not the last. I’m sure that at the time a majority of workers felt that any jobs, and concomitant skills, swept into the dustbin of economic history, were well worth the advantages gained in time and convenience provided by the new iron horse. After all, wouldn’t you prefer driving a train to shoeing a temperamental flesh-and-blood horse?

Although scientific progress has always crashed into economies like a wave, newer and more rewarding careers were usually revealed. The current wave of technological advances threatens to deviate from that rosy outcome. Ford’s research shows that the workplace is increasingly becoming dominated by computers, robots, and other types of automation, and the need for a human presence in the workplace is diminishing with each passing year. Ford is not the first, and probably not the last, to comment on this phenomenon. On January 18 of last year, the Economist magazine quoted “[a] recent study by academics at Oxford University suggesting that 47% of today’s jobs could be automated in the next two decades.”

According to another study, “about 22 million factory jobs disappeared worldwide between 1995 and 2002. Over the same seven-year period, manufacturing output increased 30 percent.” So the number of jobs for humans, at least in the manufacturing environment, is grim. However, from the corporate perspective robotics and computers are making factories far more efficient.

At this point one usually hears the argument that progress in the job arena is usually considered a positive. Manufacturing jobs, after all, are frequently dangerous and offer fewer opportunities for advancement, or movement to another job sector. The American worker dreams that the next generation, his children, will have a better, more prosperous life via a professional job, e.g., accountant, lawyer, or technician.

Unlike earlier waves of scientific progress, the triumvirate of robotics, primitive AI, and highly sophisticated algorithms are displacing workers in both traditional white and blue collar tasks: “Employment for many skilled professionals-including lawyers, journalists, scientists, and pharmacists—is already being significantly eroded by advancing information technology.” Martin’s book is full of examples proving that sectors traditionally safe from scientific progress are facing serious threats. He predicts, for example, that the number of news articles written algorithmically within 15 years will reach 90 percent. And at the moment, AI is already more efficient and successful at reading certain medical tests than humans.

Worse, many CEOs now feel they have within their grasp the ideal workplace: a workplace with no, or very few, human employees. This brings us to the most disturbing trend. As Nike’s financial officer succinctly put it:  “the long term solution is…to 'engineer the labor out of the product.”’ Such a workplace promises near perfect quality control, practically no labor issues, and greatly increased profits. Capital seems unable to see the obvious consequences of automatic and thoughtless acceptance of robotics, AI, and algorithms in the workplace: If workers are not working, how will they buy the running shoes?

Perhaps for everyone’s sake we need to add an amendment to Asimov’s list concerning the right to work?