Southern History Book of the Month: Christmas in Birmingham 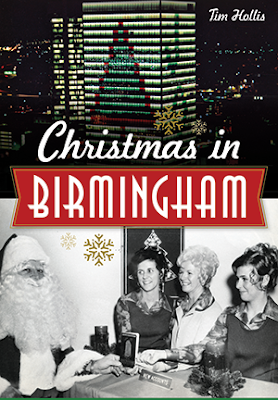 If you grew up in Birmingham you may remember when Christmastime meant lights twinkling all over Linn Park—but it was Woodrow Wilson Park then, and the downtown area was a wonderland to any child for whom Christmas still seemed eons away, even in the middle of December. If you’d like to re-live those days, take a look at Tim Hollis’ new book, Christmas in Birmingham. You can take another walk through the Enchanted Forest at Pizitz, which played a part in the yearly battle for customers between Pizitz and Loveman’s. Join the crowds for Birmingham’s Christmas Parade and travel back in time to when Drennen meant a department store and not a car dealership—though a strangely prescient advertisement from around 1900 depicts Santa driving in an automobile instead of a sleigh. Or some of you may remember Eastwood Mall and St. Nick’s arrival by helicopter.

Christmas in Birmingham is packed like Santa’s enormous bag with fascinating details of a time when Christmas just wasn’t the same without a trip downtown to shop and see the sights, but there are some surprises as well, such as an excerpt from a Loveman’s editorial that urges customers to “begin your shopping Monday, December 3” instead of waiting until the week prior to Christmas. When you see the crowds at the malls in the last few days before Christmas, it’s easy to tell that most people still don’t heed that advice! And holiday time off was different in those days:


The idea of waiting until December 3, much less the fifteenth, to begin one’s Christmas shopping may seem like it belongs not just in another century but on another planet considering that most stores today have decorations appearing in mid-September. It is just as surprising to learn . . . that stores did not close on Christmas Day; Loveman’s was open until 1:00 PM on the holiday, and nearby Drennen & Co. kept open from 8:00 AM until midnight on Christmas Day.

Suddenly my own working hours look a good bit more generous. I couldn’t read this without a flashback to A Christmas Carol when Scrooge is aggravated with the idea of Bob Crachit taking off all of Christmas day for his holiday.

However jam-packed with events and activities your holiday season may be, take some time off to enjoy Christmas in Birmingham. You may want to read it with your children (or grandchildren) to show them a different side of Birmingham, or you might have your older family members pass it around and see what they remember about how the city used to celebrate. However you choose to savor it, this book will give you some of the warmest feelings to be had this side of a cup of hot cocoa. Happy Holidays!