The Information is Out There

- January 27, 2016
Whether you’ve been a fan for years or decades, or if you’re a total newcomer, you’ve probably heard about the new season of The X-Files.  At the very least you've heard the creepy, eerie theme song.  In the new season's two-part premiere Monday and Tuesday, viewers caught a quintessential episode full of pre-established mythology, alien bodies, and intense conversations about the existence of extraterrestrials. Or maybe it’s some kind of government conspiracy -- that’s the question the show has asked for 23 years.

The X-Files is a series about two FBI Special Agents, Dana Scully and Fox Mulder, who take on cases of unexplained phenomena and uncover secret plots and conspiracies of their own up to the very top of the FBI. The original series ran from 1993 to 2002, with two films - one in 1998 and the other ten years later in 2008, and the 2016 “revival” is designed for viewers of the original series as well as newcomers. It’s a healthy combination of overarching mythology episodes as well as monster-of-the-week episodes that are fine as standalone watching experiences. 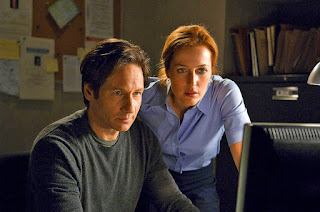 Special Agents Mulder and Scully investigating a possible conspiracy.  The internet is much more sophisticated now than in 1993...


When you inevitably become curious about the different conspiracies covered in the show, you’ll want to visit the Social Sciences department at BPL's Central location. We have plenty of books and DVDs on topics ranging from UFOs to spirits, the paranormal to extraterrestrial life, and even government conspiracies.

Happy watching, and remember: the truth is out there.

Signs on the earth : deciphering the message of Virgin Mary apparitions, UFO encounters, and crop circles by Richard Leviton (2005)

Contactees : a history of alien-human interaction by Nick Redfern (2010)

UFOs : myths, conspiracies, and realities by John B. Alexander (2011)

Paranormal : my life in pursuit of the afterlife by Raymond Moody with Paul Perry (2012)

Unknown said…
I've been an X-phile from the start and all things X-Files catch my eye. Good job tying in the new episodes to what the library has to offer! THE TRUTH IS OUT THERE!
9:20 AM

Unknown said…
Thank you so much! I'm a "new" fan (as of earlier last year) in celebration of the new series, so I hope I did it justice. I want to believe!
10:38 AM