From the Archives: He Calls Me by Lightning: The Life of Caliph Washington and the Forgotten Saga of Jim Crow, Southern Justice, and the Death Penalty 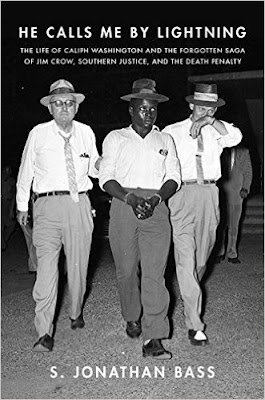 He Calls Me By Lightning: The Life of Caliph Washington and the Forgotten Saga of Jim Crow, Southern Justice, and the Death Penalty
S. Jonathan Bass

In the latest book researched in the Birmingham Public Library Archives, Dr. S. Jonathan Bass of Samford University explores the timely topic of race, violence, and law enforcement. Published by Liveright, an imprint of W. W. Norton, the book traces the story of Caliph Washington, an African American teenager who lived in 1950s Bessemer, Alabama. Wrongfully convicted of killing a police officer, Washington came within minutes of being executed before he was finally exonerated and released from prison.


He Calls Me By Lightning is one of more than 400 books published using the collections of the Birmingham Public Library Archives, including five recipients of the Pulitzer Prize and one recipient of the National Book Award. Documentary films and television series researched in the Archives have appeared on most major television networks and include recipients of the Academy Award, the Peabody, and the Emmy. Exhibits researched in the Archives may be found at the Smithsonian’s National Museum of African American History and Culture, the Alabama Department of Archives and History, the Birmingham Civil Rights Institute, and other locations.
By Tressa Fancher