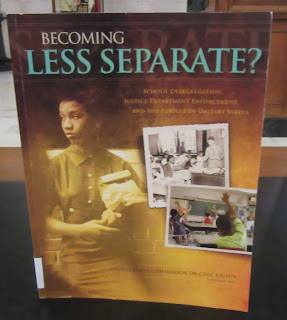 With the proliferation of U.S. charter schools, school redistricting, and dialogue about school vouchers, the question surfaces: Is this the resegregation of schools in the U.S.? Over sixty years after  Supreme Court order of desegregation of U.S. schools, why is this discussion still relevant?

A quote from Natalie Y. Moore, author of The South Side: A Portrait of Chicago and American Segregation, sums up the concern of many. “If we’re going to effectively address race relations, we have to address our separateness.”

Simply Google the term “resegregation” and you get over 97,000 hits. Books, newspaper, professional and academic articles abound on resegregation for those who are interested. Listed below are just a few of the library's books and government documents on the topic.