Local Author Art Black to Give Talk on Birmingham Barons Book, Showdown at Rickwood, May 2 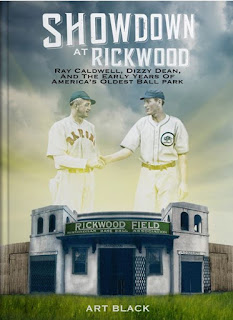 What: Author talk and book signing with Art Black, author of Showdown at Rickwood
When: Tuesday, May 2, 2017, 5:30 p.m.
Where: Central Library, Linn-Henley Research Library, Arrington Auditorium, 4th floor
Details: Free and open to the public. Books will be available for purchase. Jim Reed, owner and proprietor of Reed Books, will offer introductory remarks.

Before major league baseball came south, the Dixie Series was the crowning event of the summer for Birmingham sports enthusiasts. Pitting the champions of the Southern Association and the Texas League, the series produced many memorable moments during its heyday from 1920 to 1958. For fans of the Birmingham Barons, however, the contest of 1931 was the most memorable of all.

The dramatic 1931 Dixie Series between the Birmingham Barons and the Houston Buffaloes serves as the backdrop of the newly published book Showdown at Rickwood. Written by local author Art Black, the book focuses not only baseball culture in the Magic City, but explores as well the social and economic climate of the Birmingham district as it was evolving into a major industrial center during the early decades of the 20th century. Through World War I, the Roaring Twenties, and the onset of the Great Depression, Birmingham and its citizens weathered the turbulence of national and international events. In the midst of this unrest, many found respite in the calming rhythms of the national pastime.

Please join us on Tuesday, May 2, at the Birmingham Public Library’s Central location to welcome the publication of Showdown at Rickwood and meet the book’s author, Art Black. Copies of the book will be available for purchase.

The program is free and open to the public. For more information, contact Jim Murray at 205-226-3691 or jmurray@bham.lib.al.us.

The Birmingham Bound author series recognizes authors who researched their books utilizing the resources available at the Birmingham Public Library. Historians, journalists, and other writers from around the world have produced hundreds of books using the Library’s collections and these books include five recipients of the Pulitzer Prize.
By Tressa Fancher