Book Review: The Stranger in the Woods: The Extraordinary Story of the Last True Hermit 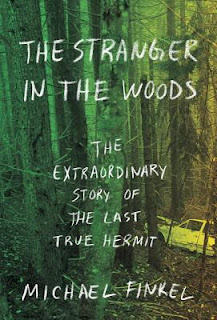 The Stranger in the Woods: The Extraordinary Story of the Last True Hermit
Michael Finkel

In 1986 Christopher Knight dropped out of American society. He lived alone in the Maine woods for twenty-seven years. During this time he only said one word to anybody. Why would anyone do this? How did he cope? How do we know about him? Michael Finkel answers these questions and many more in this rare account.

We don’t know how many hermits there are in America. They usually don’t wish to be found. The only reason we know about Christopher Knight is that he was found. He was arrested. The reason is because he stole. Though Knight was in many ways stupendously self-sufficient, he survived partly through stealing supplies. What’s astonishing is that he thieved for decades without being caught. This part of the book is riveting and wholly absorbing. True crime followers will be in for a treat. Though he lived in a virtually impenetrable forest area, he was quite close to a camp resort. Knight was probably as perfect a thief as you could imagine. He committed over a thousand robberies and never got caught. Local law enforcement personnel pursued him for much of their careers, to no avail. What is extraordinary is that Michael Finkel has been able to pry loose this story from the mouth of one of the most notoriously unsocial persons you’ll ever encounter. Knight, who wanted to live his life anonymously, ended up becoming the best-known person in Maine. It’s one of the many rich ironies in the book.

After Knight had been in the forest a long time, Finkel says that the “dividing line between [Knight] and the forest…seemed to dissolve. His isolation felt more like a communion.” Knight said, “My desires dropped away. I didn’t long for anything. To put it romantically, I was completely free.” Well, yes and no. He achieved the mystical goal of spiritual hermits through the ages, but he couldn’t have had the luxury of reflection without all the stolen goods. He felt terrible guilt every time he robbed. This irony is one of the main things that absorbs the reader. You so badly want to admire Knight, but you can’t. It’s a very satisfying read because it’s such a workout for your divided emotions.
By Tressa Fancher