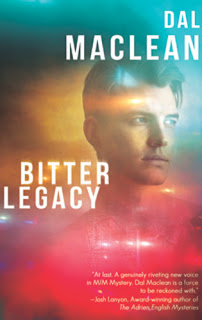 I thoroughly enjoyed Dal Maclean’s debut novel, Bitter Legacy, an engaging police procedural set in London’s Metropolitan Police. It involves Detective Sergeant James Henderson, an up-and-coming detective on the fast track to become an inspector, in his first murder investigation of barrister Maria Curzon-Whyte. During the course of the investigation, James comes across a group of men who intrigue and tempt him to join their circle. One man, in particular, photographer Ben Morgan dares him to embrace a carefree, promiscuous lifestyle. In spite of his best efforts, the investigation balloons into a spate of cruelty and wickedness. As the body count rises and disturbing secrets are revealed, James finds his personal and professional lives threatened by a bitter legacy from the past.