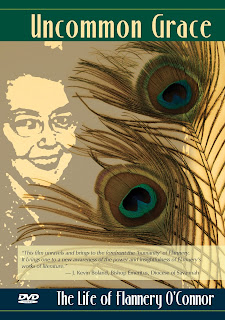 What: Screening of Uncommon Grace: The Life of Flannery O'Connor; Q&A with filmmaker Bridget Kurt to follow
When: Saturday, March 24, 1:00-2:30 p.m.
Where: Central Library/Arrington Auditorium
Admittance: Free and open to the public

Despite her premature death at age 39, Flannery O’Connor left behind one of the most haunting and strikingly original bodies of work in 20th century literature. With the rural South as her backdrop, she brought to life a string of eccentric characters torn between their worldly ambitions and the need for a more enduring truth. This film traces the people and events that shaped her remarkable career, as well as the important role that Catholicism played in her writing. Featuring expert commentary and rare photographs, Uncommon Grace will give you a new appreciation for this highly celebrated, yet often misunderstood, storyteller.

The screening of Uncommon Grace will be followed by a Q&A with filmmaker Bridget Kurt.

Links:
Meet the team at Beata Productions
"Uncommon Grace: Flannery On Film." An interview with Bridget Kurt, producer/director of the first film about the life of Flannery O’Connor. Deep South Magazine. May 5, 2016
By Tressa Fancher