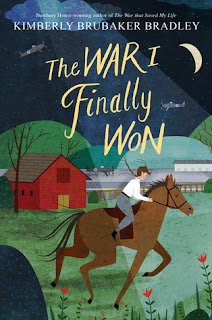 This sequel to The War That Saved My Life continues the story of Ada and her new-found family in World War II. Ada has a club foot and is undergoing surgery to reconstruct her ankle so she can walk without pain. She and her brother Jamie have just escaped the Blitz which destroyed parts of London. They have also escaped from their abusive mother into the custody of Susan, an unlikely savior who took them in when they evacuated London before its bombing. This story picks up directly after its predecessor’s happy ending and heaps uncertainty and change onto our main characters.

Ada’s mother is killed in a bombing, leaving her orphaned and available to be adopted outright. This can be seen as both good and bad news and Ada has no idea how to feel. How could she feel happy about the passing of her mother? Was she a monster? Or was her mother the monster? Their home in the countryside with Susan is utterly destroyed by a bomb, leaving the family homeless. Luckily, they’re allowed to borrow a cottage from Lady Thornton. The house is huge and mostly empty and gloomy and cold, but that is soon remedied. Lady Thornton and a Jewish refugee from Germany move into the cottage as well. Ada and her family learn a lot about trust, identity, friendship, and grief in the year they spend together. Through all the hardships, Ada emerges wiser and more secure of her place in the world.

I loved every moment of this book. It may not sound like an action-packed novel with a fast-moving plot, but it is so much more compelling than the typical adventure story. It provides a look into the lives of children living through World War II that is often overlooked in history classes and discussion. It’s also a great opportunity for readers to see character growth from a relatable protagonist. Though I highly recommend The War That Saved My Life, you don’t have to read that to understand this story. The book fills in the blanks by referencing past events without bogging the narrative down with exposition. I would recommend this middle grade book to kids and adults who are interested in history and enjoy focusing on relatable characters.
By Tressa Fancher