The Central Library's Create205 Learning Lab is allowing young patrons in downtown Birmingham to get a chance to experience what it is like to record their own rap record.

Through a popular Black History Month program called Poetry + Beats = Unique Rhythms and Sounds, Create205 on Mondays and Wednesdays throughout February opened its mics to aspiring artists of spoken word poetry, music, and rap. Under the tutelage of Gavin Tucker, the Central Library Youth Department's self proclaimed "music engineer," the music studio aims to help patrons create their own rap records, said Bessie Miller, head of the department.

Poetry + Beats has been well received by Central Library Youth Department patrons. It is among the most popular programs used by after school students from nearby Phillips Academy. This week, on Wednesday, February 20, three teens from Higdon Hill School in Birmingham recited original poetry about the Rev. Martin Luther King, Jr. as Central Library's Tucker recorded them. 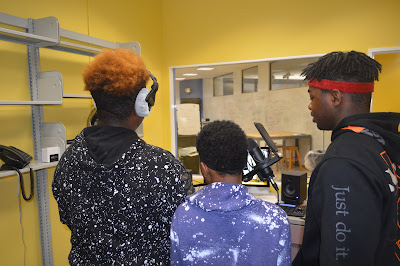 Tucker had both students give them a rap song recorded by one of their favorite artists. He then had the students read the lyrics to their poems, added the words to the music, and put his magic touch as a music producer to work. Less than two hours later, the students—using their rap monikers "T.G.E. Lil David," "DJ Round Boy," and "Ms. Miller's Son,"—got a chance hear the first version of their very own original rap songs.

If you desire to learn how to create your own rap song or other musical recording, stop by the Create205 Learning Lab in the Central Library.
By Birmingham Public Library