Southern History Book of the Month: Lizards and Snakes of Alabama 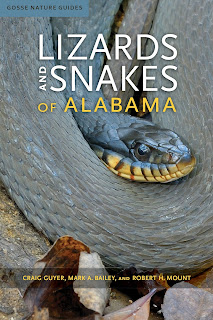 It’s almost spring. Warm weather means flowers blooming, birds singing and building nests, and people spending more time outside. If you like to go hiking or dig in the garden, you might want to have a copy of Lizards and Snakes of Alabama on hand, because the change of seasons means increased activity for reptiles as well. This handsome guidebook includes full-color plates illustrating different varieties of snakes and lizards, along with detailed species descriptions and maps showing their distribution throughout the state. In the text, there is also a good balance between the scientific terminology intended for professional herpetologists and the more garden-variety descriptions appropriate for the person who just wants to know what that creature is in his back yard.

Lizards are a common enough sight in our yards and around our houses; most of us have seen the anole inflating the red dewlap on its throat in a courtship display or caught a glimpse of a striped skink hurrying across the lawn and disappearing under a rock. But there are more lizards in Alabama than I expected, such as the Horned and Spiny Lizards reminiscent of the Desert Southwest region of the U.S. And there is the family of Glass Lizards, some of which could be mistaken for snakes because they are long and legless.

Most people probably have a far more visceral reaction to snakes than to lizards, as ophidiophobia (fear of snakes) is frequently cited in top ten lists of fears and aversions; other people have a fear of reptiles in general. But as Lizards and Snakes points out, “Worldwide, there about 3600 species of snakes. The vast majority are non-venomous. Forty-four species are native to Alabama, only six of which are dangerously venomous to humans.” That doesn’t mean a non-venomous species can’t deliver a nasty bite if provoked, but most snakes would prefer to avoid us if possible—and most of them do this so well that we never see many of the snakes that undoubtedly see us.

Lizards and snakes may not be what we think of as “cuddly” animals but they serve us well with lizards helping to keep down the insect population and with snakes preying on rodents that carry diseases. Many a farmer might swear at the snake that ate some of the baby chickens, but another farmer might encourage a snake to hang out in his corncrib and keep the rats and mice away. Whatever our feelings might be about reptiles, they play their part in the balance of nature and if you want to learn more about this part of the animal kingdom, Lizards and Snakes of Alabama would make a well-researched and interesting addition to your library.

For further information:
Reptiles—Outdoor Alabama
Reptiles of Alabama—iNaturalist
“The Insect Diet of Alabama Lizards”
“Snakes of Alabama: How to Identify All 50 Species”
“21 Interesting Facts About Reptiles”
By Tressa Fancher