Shuttlesworth, the Night He Lost All Fear 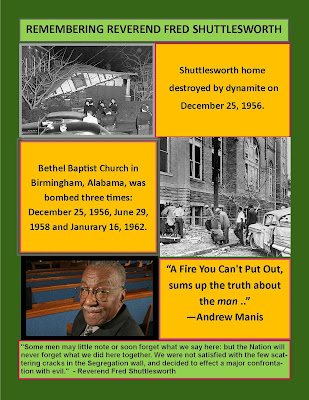 Civil rights activist Fred Shuttlesworth was a man who realized how much hate some white groups had. These groups did not want equality but wanted to keep the invisible line of segregation and discrimination going even though constructional law said otherwise. As a man he feared for himself and his family.

All that change on December 25, 1956, when Ku Klux Klan bombs exploded at his home and Bethel Baptist Church. His home collapsed around and on top of him while he was in bed. He walked away, declaring it a miracle and a sign from God that he had divine protection. This gave him a passion that existed regardless of circumstances.

There were to be two more bombings of Bethel Baptist Church in 1958 and 1962, and multiple attempts on Reverend Shuttlesworth and his family’s lives. They were guarded around the clock by the by the Citizens Guard Police.

The Birmingham Institute of Civil Rights has so generously shared some of the actual artifacts from the Citizens Guard Police that protected Reverend Shuttlesworth's interests. These can be viewed in the third floor Linn-Henley Research Library display case.
By Tressa Fancher