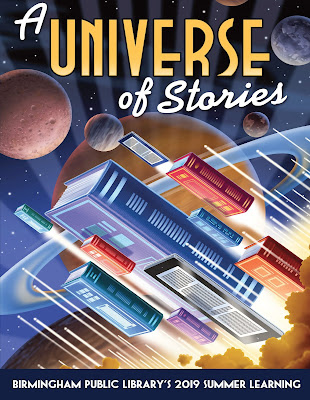 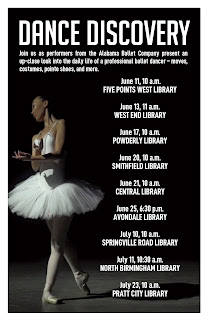 The Birmingham Public Library's 19 locations are hosting more than 400 free programs for kids, teens and adults as part of 2019 BPL Summer Learning.

The 2019 theme is "A Universe of Stories." Many of the programs are designed to help students on break from late May through early August avoid “summer learning loss," a phrase referring to when students lose knowledge gained during the preceding school year.

For a full listing of these and other BPL programs, click on the BPL calendar

Among the highlights of 2019 Summer Learning: 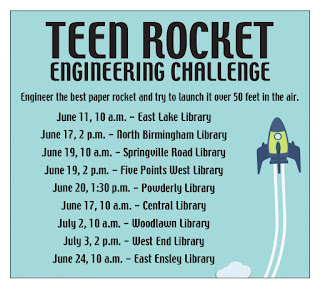 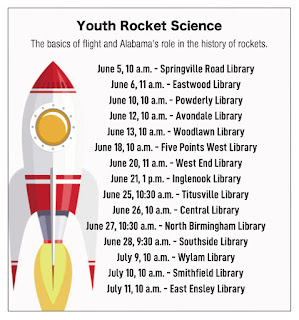 2) Literacy Workshop, June 10 – Parents and children are invited to come brainstorm as we demonstrate fun, inexpensive ways to increase kindergarten and first-grade readiness this summer
3) Child Development Workshop, June 17- Did you know the first five years are the most important part of a child’s development? Join us as we demonstrate how to build simple motor skills essential to development such as learning how to turn a knob and hold pencils.

• The McWane Center Visits BPL Wednesday June 12 at 10 am in Central East Grand Reading Room- Rocket demonstration and spotlight on gravity in space as BPL spotlights 50th anniversary of Apollo 11 landing on the moon. The McWane Center will bring this same program to Smithfield Library on Thursday, June 27 at 10 a.m. and the Springville Road Library at 4 pm. Friday, July 5.


·  Dance Discovery – Free dance workshops featuring members of the Alabama Ballet Co. sharing an up close look into the daily life of a professional ballet dancer.

• Five Pen Craft workshops teaching patrons how to decorate ink pens for themselves or as gifts for others.

• Inglenook Library on July 17 will celebrate its 40th anniversary of when the building was converted from a Birmingham Fire Station into a neighborhood library.

• Two Martial arts demonstrations - June 26 by the Birmingham Academy of Martial Arts at the Springville Road Regional Library and another July 18 at West End Library on the art of self-defense by martial arts instructor LaQuan Jackson.

• The Bib and Tucker SewingOp will lead a quilting session saluting the Alabama Bicentennial, working with an established quilting group in Pratt City Wednesday, July 24, 10:30 a.m.

• Jan Mattingly, aka The Science Lady’s basics of rockets and other science programs taking place at BPL locations across the city all summer long. Her programs include a Rocket Engineering Challenge at Pratt City Library at 2 p.m. Tuesday June 4 in which kids will make paper rockets and try to launch them 50 feet into the air.

• Color Me Stress Free- Wednesday, June 5, 10:30 a.m. – Join us for a fun and relaxing adult coloring session with jazz music Al.com in 2016 did a feature on how adult coloring workshops at BPL helped patrons reduce stress.