Southern History Book of the Month: Lost Attractions of Alabama 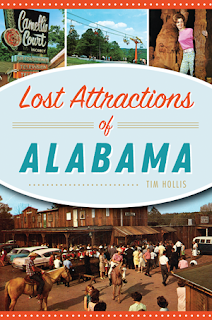 This is the time of year to be thinking about summer activities and family vacations. Some of you will remember getting up for an early start to beat the heat, because the car only had a “4-60” air conditioner. (And no seat belts—did you ever ride standing up on the seat?) Before the interstate highway system, businesses counted on unusual displays and attractions to bring in customers who were anxious to break the monotony of a drive that could last for many hours. If you fondly recall those days, you’ll want to take a look at Lost Attractions of Alabama by Tim Hollis. It is a chronicle of the weird and the wonderful, of the “gone but not forgotten.”

In fact, it’s amazing just how long some of these lost attractions continue to make their presence felt. Take, for example, the Giant Nehi Bottle:

One of the state’s earliest roadside attractions was this sixty-four-foot-tall bottle on what would eventually become U.S. 280, just north of Auburn. Its existence was brief—built in 1924, the wooden structure burned in 1933—but to this day, some maps still include a dot representing “The Bottle” as a location. (p. 64)


It’s interesting to see the different trends in roadside attractions, such as the Western craze of the 50s and 60s that gave us the Dry Gulch Ghost Town near Gardendale and the Ole Fort Limestone Pioneer Village close to Athens. There’s also a nod to Space City USA—in keeping with the launch of Sputnik that set off the space race—which leads Hollis to ask the question, “Can it be classified as a ‘lost attraction’ if it was never built in the first place?” The elaborate Space City Theme Park would have been located near Huntsville but apparently never got much further than the very early stages, so few relics of it are left.

Other attractions are by no means completely lost, such as Vulcan, Birmingham Zoo, and Birmingham Botanical Gardens, but they have gone through many transformations. Remember the zoo’s Monkey Island? The Floral Clock at Botanical Gardens? Or you may have seen Vulcan’s green torch signaling that Birmingham had no traffic fatalities that day. You may also remember school trips to Moundville, only in those days the skeletons buried in the mounds were still visible. Now they have been covered over out of respect for the remains, but many of us can recall (as early as second or third grade) being shown the excavation with the bodies clearly in view.

Other changes are on a far larger scale. Anyone who vacationed in South Alabama during the 1960s and early 1970s will remember the long stretch of Gulf beaches with their oddball tourist lures like the Lighthouse Motel, Surfside Golf—AKA Spooky Golf, featuring a large purple dinosaur in a pre-Barney world—and a conspicuous lack of condos, which didn’t make much of an entrance until after Hurricane Frederic.

So if you knew where to find every Stuckey’s in the state of Alabama or if you wanted to “Travel the Wigwam Way” or if you spent time on the rides of Kiddieland in Fair Park, pick up a copy of Lost Attractions of Alabama. It’s a fun, nostalgic read that will have you asking “Do you remember?” Maybe these attractions will never be completely lost as long as someone remembers them.