What: The Birmingham Public Library Presents "A Conversation with Pulitzer Prize-Winning Author John Archibald"
When: Monday, April 5, 6:00 p.m.
Where: Live on the Birmingham Public Library Facebook page
Details: BPL Archives Department Head Jim Baggett will talk live with John Archibald about his new book "Shaking the Gates of Hell," released this week by Allen A. Knopf.  A journalist and columnist at The Birmingham News and AL.com, Archibald was awarded the 2018 Pulitzer Prize for Commentary.
On Monday, April 5, at 6:00 p.m., the Birmingham Public Library will hosting “A Conversation with Pulitzer Prize-Winning Author John Archibald.”
BPL Archives Department Head Jim Baggett will talk live with Archibald on BPL's Facebook page about his new book "Shaking the Gates of Hell," which was released by Allen A. Knopf on March 9, 2021.  A journalist at the Birmingham News since 1986 and regular columnist since 2004, Archibald was awarded the 2018 Pulitzer Prize for Commentary.
The book conversation with Archibald was originally scheduled for March 17, but was delayed due to inclement weather that hit the metro Birmingham area.
Archibald won the highest prize in newspaper journalism for a series of articles about Alabama politics giving his unique perspective on controversial events in state government and a dramatic U.S. Senate race that ended in an upset victory by Democrat Doug Jones over conservative Republican Judge Roy Moore.
Archibald is currently at Harvard University after being one of 24 journalists nationally awarded the Nieman Fellowship. His nine-month fellowship began last fall. Participants attend seminars, journalism conferences and classes at the acclaimed Ivy League school. He returns to the newspaper this summer.
In his new family memoir, “Shaking the Gates of Hell: A Search for Family and Truth in the Wake of the Civil Rights Revolution,” Archibald asks a profound question: Can a good person remain silent in the face of discrimination and horror, and still be a good person?
Click here for a book description by publisher Alfred A. Knopf, a division of Penguin Random House:
“Shaking the Gates of Hell” is about growing up in the American South of the 1960s--an all-American white boy--son of a long line of Methodist preachers, in the midst of the civil rights revolution, and discovering the culpability of silence within the church.
Archibald had seen his father, the Rev. Robert L. Archibald, Jr., the son and grandson of Methodist preachers, as a moral authority, a moderate and a moderating force during the racial turbulence of the '60s, a loving and dependable parent, a forgiving and attentive minister, a man many Alabamians came to see as a saint. But was that enough?
Even though Archibald grew up in Alabama in the heart of the civil rights movement, he could recall few words about racial rights or wrongs from his father's pulpit at a time the South seethed, and this began to haunt him.
In this moving and powerful book, Archibald writes of his complex search, and of the conspiracy of silence his father faced in the South, in the Methodist Church and in the greater Christian church.   Archibald writes of this difficult, at times uncomfortable, reckoning with his past in this unadorned, affecting book of growth and evolution.
“My dad was a Methodist preacher and his dad was a Methodist preacher,” writes John Archibald. “It goes all the way back on both sides of my family. When I am at my best, I think it comes from that sermon place.”
During his conversation with BPL’s Jim Baggett, Archibald will share his thoughts  as depicted in the book about growing up amidst Birmingham’s turbulent civil rights movement of the 1960s in a white family that was Christian, but afraid to speak out publicly against racism.
Everything Archibald knows and believes is “refracted through the stained glass of the Southern church. It had everything to do with people. And fairness. And compassion.”
BPL posted  book review of Archibald's book. Read the review by clicking here.
Watch live on the BPL Facebook page at 6:00 p.m. on Monday, April 5, for this fascinating conversation with Archibald, a journalist who is not afraid to stir up conversation among critics and supporters alike across Alabama with his in-your-face commentary in the Birmingham News and on al.com. 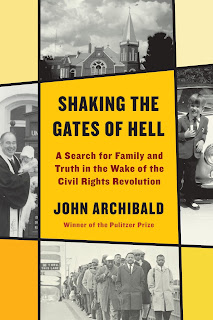 “Shaking the Gates of Hell” is available on the Penguin Random House website as well as Amazon and other online book sellers, and in bookstores nationwide. The book was released on March 9, 2021.
Archibald's new book is even more timely as testimony began this week in the trial for the Minneapolis officer accused of killing George Floyd, whose death last May led to a deep reflection across the United States on the issue of racial injustice today.
The Birmingham Public Library has some copies of "Shaking the Gates of Hell" available for checkout by clicking here
Interview requests for John Archibald can be sent to Jessica Purcell of publisher Alfred A. Knopf at jpurcell@penguinrandomhouse.com.
Book reviews of “Shaking the Gates of Hell” by John Archibald:
“Evocative . . . a complex, fraught exploration of ‘the complicit and conspiratorial south’ . . . a sincere, poignant synthesis of memoir and social history of a troubled time.”—Kirkus
“Poignant . . . A powerful reflection on the influences of family and community and the ability to act justly in tumultuous times. Biography readers, especially those interested in reconciling the past, will be captivated by Archibald’s honest, conversational style.”—Library Journal
By Roy L. Williams