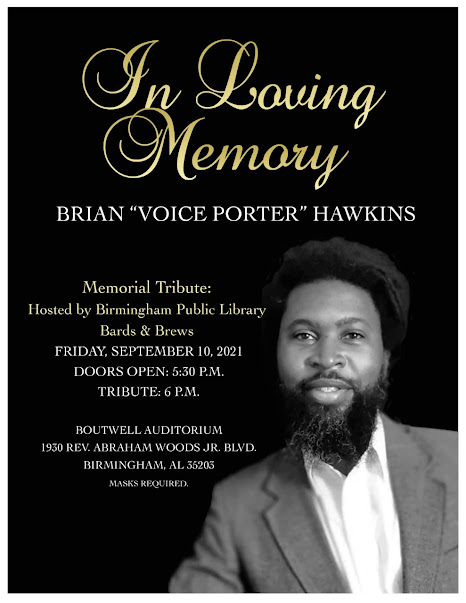 What: In Loving Memory: BPL Bards & Brews Tribute to Brian “Voice Porter” Hawkins
When: 6:00 p.m. on Friday, September 10, 2021. Doors open at 5:30 p.m.
Where: Boutwell Auditorium, 1930 Abraham Woods Jr. Blvd, Birmingham, AL 35203
Details: The Birmingham Public Library & Bards & Brews hosts a tribute to longtime host and emcee Brian “Voice Porter” Hawkins, who died August 25 at age 42. BPL will be joined by spoken word artists inspired and mentored by Voice Porter paying tribute to his legacy in the metro Birmingham arts community. For background on Voice Porter's legacy, click on this link
Birmingham, Ala. – The Birmingham Public Library’s popular spoken word poetry/craft beer program, Bards & Brews, happening this Friday, is hosting a memorial tribute to longtime host Brian “Voice Porter” Hawkins. Best known by his stage name "Voice Porter," Hawkins was found dead in his Warrior home on August 25. He was 42.
The “In Loving Memory” tribute will take place at 6:00 p.m. on Friday, September 10, in the Boutwell Auditorium, 1930 Abraham Woods Jr. Blvd. in downtown Birmingham. The public is invited, but facemasks are required inside the building.
A public viewing for Voice Porter was held at the Boutwell Auditorium last Friday, September 3.  He was buried last Saturday, September 4.
Now in its 11th year and held monthly at public libraries, breweries and other venues across metro Birmingham, Bards & Brews has built a reputation as a unifying event for Birmingham's spoken word poetry and craft beer community. Voice Porter’s passionate support as emcee and poet has played a major role in Bards & Brews' success.
Candice Hardy, creative director for Bards & Brews, said Voice Porter was an incredible asset to Birmingham’s arts/poetry community. Friday’s memorial tribute is to honor his legacy.
“From his notable character, to being a community activist, and spoken word artist, Voice left his footprint on the city of Birmingham and the nation,” Hardy said. “He captivated audiences with his infectious smile, notable character, and extensive vocabulary.”
Voice Porter made his last public appearance hosting Bards & Brews at the August 13 Open Mic poetry event held at the Central Library.  Hardy recalls being mesmerized at the event as the talented spoken word artist  delivered a piece he entitled “A Poem for Indigo."
“His words flowed across the room like a summer breeze meeting the morning dew,” Hardy said.
Lynn Flowers-Martin, a BPL board member, said she only had the pleasure of hearing Voice Porter deliver poetry once -at his last event, the August 13 Bards & Brews.
“Given that it was Voice's last time serving publicly as host of Bards & Brews, I am honored that I got to experience the joy of watching Voice Porter perform in person,” Flowers-Martin said. “He was truly a gem and strong advocate for the Birmingham Public Library. I extend my heartfelt prayers to his family."
The resounding sentiment for many still in shock over Voice Porter’s death is that "he pushed us all to believe in ourselves and to fulfill our life's purpose,” Hardy noted.
“Voice is what some would consider a ‘gentle giant’, valiantly warring for the voices of all people to be heard,” shared Hardy. "Although he is no longer with us physically, we will continue his legacy of celebrating literary arts through platforms like Bards & Brews. His life and spirit will continue to resonate as we remind the world to use his catchphrase soap (S.O.A.P.) Support Our Artists Please!”
Lee Green, a veteran performer at Bards & Brews who was among many poets mentored by Voice Porter, expressed appreciation to the BPL family for organizing Friday’s tribute. Although a writer of original poetry since childhood, Green said he never performed publicly until meeting Voice Porter at a Bards & Brews event in 2012.
“I was inspired and encouraged by Voice; he made me feel like part the Bards & Brews family immediately,” Green said. “He was the kind of person who became your friend the instant you met him.”
Green described Voice Porter as an incredibly talented spoken word and creative artist - someone who could capture a room with his smile and his artistry.
"Voice was so special because he used his talent to help foster other talent and create community,” Green said. “You could feel his passion and truth in his spoken word. He spoke of love, art, beauty, involvement and making a difference.
What Green admired most about Voice Porter was his passion for building up artists and helping others.
He was all about family, community and selflessly creating opportunities for artists to shine, Green said.
“Voice was the epitome of what he professed -- use SOAP (Support Our Artists Please)," Green said. "We have a thriving spoken word, poetry and arts community thanks to Voice. He inspired my love for Bards & Brews and made me wanted to get involved in helping ensure this program grows and thrives as a model for how libraries can build community through fostering the arts and education. The best honor we can give to his legacy is to carry on his vision and nurture what he has created.”
James Sullivan, another member of the BPL Board of Trustees, recalls first meeting Voice Porter as a member of BPL Young Professionals. He said Voice’s persona and passion for Bards & Brews impressed him.
“Voice was always the same – a gentleman and genuinely nice guy,” Sullivan said. “I hope this memorial tribute will teach people who he was and display his many contributions made around the city.”
Hardy, creative director of Bards & Brews, said Voice Porter's legacy at the Birmingham  Public Library as well as throughout the city will not be forgotten.
“Voice was so special because he used his talent to help foster other talent and create community," Hardy said. "You could feel his passion and truth in his spoken word. He spoke of love, art, beauty, involvement and making a difference.”
For information on the virtual Bards & Brews and BPL’s online programming, go to www.cobpl.org. You can also follow the BPL Facebook page and Bards & Brews Facebook page.
By Roy L. Williams