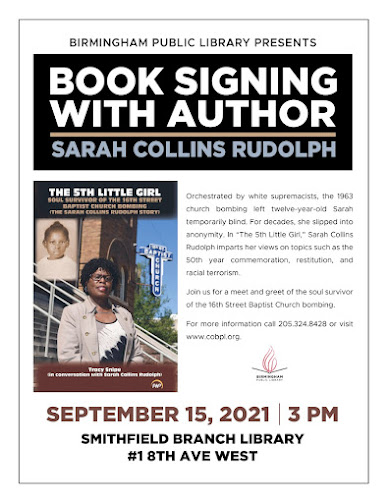 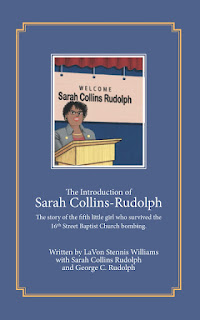 Also in attendance at Wednesday’s book signing/talk by Collins Rudolph will be LaVon Stennis Williams, author of the new book The introduction to Sarah Collins, co-written with Sarah Collins Rudolph and George Rudolph. Her book was released last week, September 8.
Sequoria Lewis, Smithfield Library Branch Manager, said the library is excited to host Sarah Collins Rudolph on the anniversary of the tragedy that shocked the nation and prompted the world to look closely at the hatred towards blacks taking place in Birmingham during the 1960s civil rights movement.
“There are those who have made an impact on history yet we should never forget those who have forever been affected by events recorded in history," Lewis said. "Get ready to meet Sarah, survivor of the 16th Street Baptist Church Bombing.”
The 5th Little Girl chronicles the life of Sarah Collins at the height of the Civil Rights era including the day that changed her life forever-September 15, 1963. Many may minimize the tangible effects that the tragedy brought about because of their conceived notion that it was not as “drastic” as death. Yet the challenges of losing sight or an older sister can produce a “what if” syndrome that could potentially stick in the recesses of your mind for a lifetime, said Lewis, who has read the book.
“Chapter twelve is where I really nestled in because it is at this point I was fortunate to meet Sarah as an 11 year old girl,” Lewis said. “Did you know that she carries pieces of that fretful day with her wherever she goes?”
To find out more, join Smithfield Branch Library and discover more about Sarah Collins Rudolph, The 5th Little Girl.
Learn more about the 16th Street Baptist Church bombing by clicking here
By Roy L. Williams