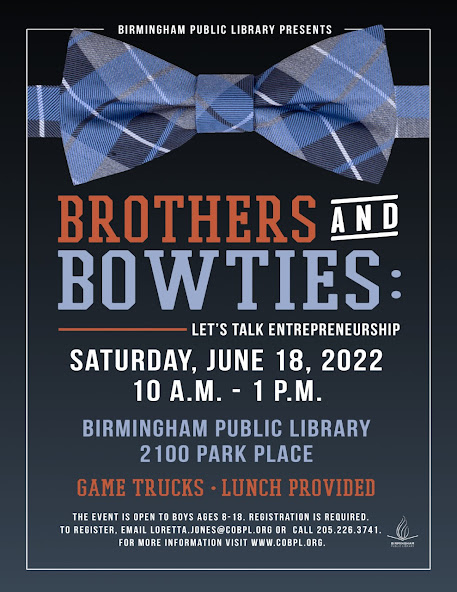 What: Brothers & Bow Ties: Let's Talk Entrepreneurship
When: Saturday, June 18, 10:00 a.m. - 1:00 p.m.
Where: Central Library, 2100 Park Place, Birmingham, Ala.
Details: As part of an effort to provide positive role models for young boys, the Birmingham Public Library will host “Brothers and Bow Ties: Let's Talk Entrepreneurship” on Saturday, June 18. BPL is inviting parents and youth groups to bring boys aged 18 and under, as well as men willing to come dressed in bow ties and invest time with boys at this event. Speakers will be R. Jordan Davis of Royal Prospect Consulting; Eddie Carr of Carr  & Associates Realty; and Jermaine "FunnyMaine" Johnson, comedian. Daryl Grant of KPMG will serve as a facilitator. A free game truck will be on-site and a pizza lunch from Slice Stone Pizza & Brew in Lakeview will be provided for attendees.
Birmingham, Ala. - Do you have a young boy or know one seeking positive adult male role models? The Birmingham Public Library is preparing to host “2022 Brothers and Bow Ties: Let's Talk Entrepreneurship" this Saturday, June 18, from 10:00 a.m. to 1:00 p.m. at the Central Library downtown.
Boys in attendance will receive encouraging words from speakers as well as free pizza, compliments of our sponsor Slice Stone Pizza & Brew in Lakeview.
"Brothers and Bow Ties" is designed to motivate males 18 and younger by connecting them with positive male role models. Men who desire to give back to the next generation are invited to attend and encouraged to wear bow ties.
To help us with a head count, men who want to participate are asked to contact BPL Regional Manager Loretta Jones at loretta.jones@cobpl.org or call (205) 226-3741.
Bow ties are becoming a popular staple in men's wardrobes, more than just a symbol of nerds and science geeks. These days, bow ties represent creativity - a confident willingness to be different and an uncompromising embrace of style, according to a Gentleman's Guide to Bow Ties" by R. Hanauer, Fine Accessories for Men.
Genni Threet, blogger for R. Hanauer says, “While it can be a daunting task to select shirts, pants, and jackets that best represent your personality, accessories are far easier and more attainable tools to express yourself. That’s where your favorite bow tie comes in.”
"Brothers and Bowties” made its inaugural debut MLK Weekend in January 2020, partnering with the historic Birmingham Civil Rights Institute, The Birmingham Mayor’s Office: Divisions of Youth Service, and several organizations across the City of Birmingham. Timothy Alexander, author, and motivational speaker, served as the 2020 keynote speaker.
BPL hosted a virtual Brothers & Bow Ties in January 2021.
By Roy L. Williams