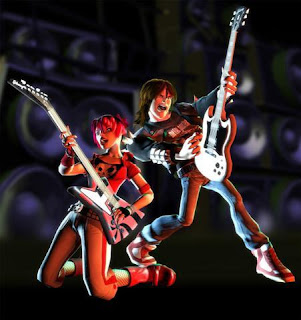 Music Gaming Tournament Details
(featuring Guitar Hero 2, 3: Legends of Rock and Rock Band 2 for Xbox 360)
What: Players will form bands comprised of four members. These bands will work together to obtain the highest score obtainable with the boundaries of the rules.
Who: Produced and hosted by Greg "Mastermind" Kennedy
Where: Springville Road Library
When: Saturday, November 15
Time: Registration begins at 11:00 a.m.

3 Rounds Of Gameplay:
Round One: Solo
Round Two: Doubles
Round Three: Full Band

Round One Rules:
Each band will elect one member to represent their team in Guitar Hero 3: Legends of Rock. They will get to choose and play one song from that game and their scores will be recorded. The band with the highest score will get to choose the order of which players play in the second round.

Round Two Rules:
Each band will elect a team of two players to play together a set of two songs in Guitar Hero 2. These songs and their scores will be added together and this will decide who qualifies for the final round. (In case of a tie, the first round score is the tiebreaker to decide who advances.)

Final Round Rules:
Every band that qualifies for the final round will play a full three song set in Rock Band 2. These songs and their scores will be recorded and added together to help us crown a "new" champion.
By Tressa Fancher