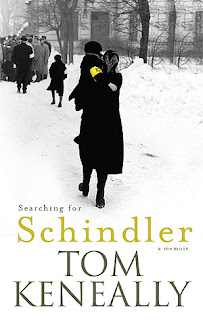 Searching for Schindler, Thomas Keneally's latest nonfiction book, is about a chance encounter in 1980 with a Polish Jew named Poldek Pfefferberg while shopping for a briefcase, and where that encounter led.

Pfefferberg, number 173 on Oskar Schindler's famous list, convinced Keneally that the story of Schindler is one that begs to be told: "I was a Jew imprisoned with Jews. So a Nazi saves me and, more important, saves Misia, my young wife... Not that he was a saint. He was all-drinking, all-black-marketeering, all-screwing, okay? But he got Misia out of Auschwitz, so to me he is God."

Pfefferberg had tried selling the story to the screenwriters and filmmakers who came into his Beverly Hills luggage shop, but no one was interested. In 1963 Metro-Goldwym-Mayer bought the story rights from Oskar Schindler, who was living in Frankfurt at the time, but the movie was shelved.

An intrigued Keneally sifted through Pfefferberg's extensive Schindler files and saw the potential for a great story. Schindler's Ark was published in 1982 and won the Booker Prize. (The title on republication was changed to Schindler's List, the title of Steven Spielberg's 1993 movie.)

Reserve your copy of Searching for Schindler in advance. 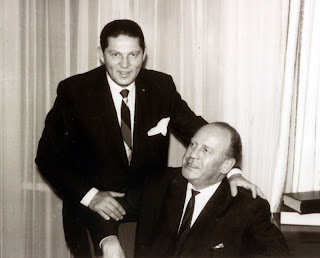 Search the JCLC catalog for more information on the Holocaust