Life After the Bugger War 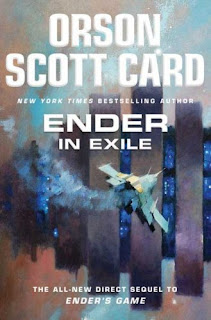 It's been 23 years since readers were introduced to Andrew "Ender" Wiggin, a 12-year-old tapped to save the human race from an insect-like alien race called Formics, or "Buggers." Orson Scott Card's Ender in Exile is a direct sequel to Ender's Game, and it explores the lost years of Ender's life between the ages 0f 12 and 35.

After extensive training at Battle School—beginning when he was just 6-years-old—and winning the third war against the Formics, Ender must leave school and find his place in the world. But what does the Savior of Earth do for an encore?

With every nation vying to own a piece of Ender, it is decided that Ender will not return to earth but will travel to one of the worlds won in the war. He is joined by his sister, Violet, who begins writing a history of the Bugger War.

Later when Ender is searching for a new site for future colonists, he discovers a "note" from the Formics in the form of a game he played in Battle School. What he finds when he investigates further will lead him to write his first book as Speaker for the Dead—The Hive Queen.

The Ender saga:
Ender's Game
Speaker for the Dead
Xenocide
Children of the Mind
A War of Gifts
Ender in Exile