It's Fall—Time to Watch Hannah and Her Sisters Again 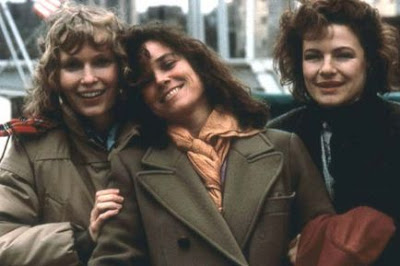 "And Nietzsche, with his theory of eternal recurrence. He said that the life we lived we're gonna live over again the exact same way for eternity. Great. That means I'll have to sit through the Ice Capades again." ~ Mickey Sachs

Every fall when there's a chill and a whiff of wood smoke in the air, I watch Woody Allen's 1986 movie Hannah and Her Sisters. I don't know why it beckons me at summer's end. There's just something about the dark wood interiors of the New York apartments, and the fact that the meat of the story is sandwiched between three Thanksgivings. The first Thanksgiving introduces the characters; the second shows their crumbling lives; and the third shows them at peace with the choices they made over the span of two years.

Now stay with me—this gets complicated. Hannah at one time was married to Mickey Sachs (Woody Allen), but the marriage crumbled when Hannah wanted children and it was discovered that Mickey was reproductively challenged. Did he sexually damage himself in some way? she wants to know. “You gonna start knocking my hobbies?" he retorts. She eventually gives birth to twins via a donation from his show business partner.

Hannah is happily married to Elliot (Michael Caine), but he is not happily

married to her. He is infatuated with her sister Lee (Barbara Hershey), who lives in a loft with the much older agoraphobic artist, Frederick (Max von Sydow). She serves as his connection to the outside world, and he depends on her for daily validation. But who validates her? Hannah is a successful actress, and the third sister, Holly (Dianne Wiest), is a confident aspiring actress/writer/singer/caterer. Lee is adrift in her own insecurities, and so she embarks on an affair with Hannah’s husband.

Mickey is a wealthy Jewish TV producer and a hypochondriac who finally gets what he thought he always wanted—a possible devastating diagnosis. He panics at the thought of dying sooner than expected, and while waiting for the results of the test, starts a desperate search for meaning in his life. He turns to religion for comfort. He hangs out with the Hare Krishnas in the park, and prepares for a conversion to Catholicism by purchasing a crucifix, a picture of Christ, a loaf of Wonder Bread, and a jar of Hellman’s mayonnaise. His parents are devastated at his conversion plans, and in a moment of weakness he turns to suicide.

But redemption arrives in the form of Holly, a former cokehead whom he once tried to date. It was a disaster then, but they cautiously give it another go. The movie was supposed to end on a down note, with Elliot still pining for Lee, but Allen decided to end his story with an intimate scene between Holly and Mickey, and it's a magical blindsiding movie moment.

My love for Woody Allen has waned over the years, but I'll never give up my visitation rights to Hannah, Holly, and Lee.