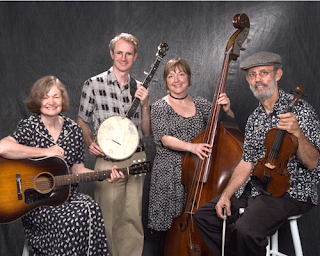 The Birmingham Public Library is excited to host the old-time string band, Flying Jenny, of Birmingham, Alabama. They play the music of the American settlers from the British Isles, which is a forerunner of bluegrass and country music. It consists of lively fiddle tunes meant for dancing as well as old songs sung on front porches and in front of fireplaces when families and friends got together after the day’s work was done. Flying Jenny (named after an old-fashioned mule-powered carnival ride) plays breakdowns on fiddle, guitar, banjo and bass, and sings old songs, often comical, in three-part harmony.

In addition to the music, a performance by Flying Jenny includes stories about the tunes and the fiddlers who first played them. They have done a number of thematic performances on such topics as Alabama history, folk art, early radio music, Christmas folk music, romance in old-time music, etc., and have collaborated with storyteller Dolores Hydock in Footprint on the Sky: Memories of a Chandler Mountain Spring, a piece in which tales, tunes and songs interact with each other to create a sense of life in an Alabama farming community. They have also provided background music for weddings, picnics, art openings, and other social events.

For more information on the band, visit http://www.bamalong.com/flyingjenny.htm#Flying%20Jenny.

Light refreshments will be served.