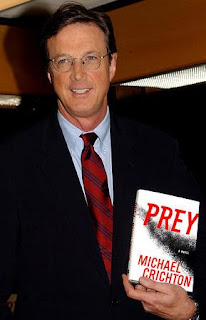 U.S. bestselling author and filmmaker, Michael Crichton, died Tuesday, November 4th after a battle with cancer. He was 66. Crichton was the author of scientific thrillers including Andromeda Strain and Jurassic Park. Next, his most recent novel, was published in December 2006. The scientific thriller focused on genetic engineering. He was also the creator of the television medical drama, ER. Crichton won an Emmy, Peabody and a Writer's Guild of America Award for the show.

Through his writing, Crichton made many of the scientific mysteries of the world exciting and easy to understand. Andromeda Strain is a classic biological thriller portraying the threat of a worldwide epidemic from microscopic organisms. Jurassic Park involves the cloning of 15 species of dinosaurs and the construction of a park so that tourists may view these creatures. Prey explores the dangers of nanotechnology and the hazards of robots created at the molecular level. Next, published in December 2006, is an interesting, thought provoking novel about genetic engineering.

Michael Crichton was born in Chicago, Illinois on October 23rd, 1942. He graduated from Harvard College and later received an M.D. from Harvard Medical School. His background in medicine and science is reflected in his writings. Crichton's first bestseller, Andromeda Strain, was published while he was still a medical student. His books have been translated into thirty-six languages and thirteen have been made into films. Worldwide, his books have sold over 150 million copies.

Michael Crichton, his gift for storytelling , and his ability to excite us about scientific wonders, will be greatly missed.
By Leslie Deason