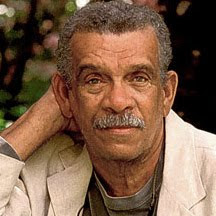 Eighty-one-year-old Derek Walcott beat out nine other poets, including Seamus Heaney, to win the T.S. Eliot Prize for Poetry for his 14th collection of poems, White Egrets. Walcott, who was awarded the 1992 Nobel Prize in Literature, published his first poem at 14.

Walcott was born in 1930 in the town of Castries on the volcanic island of Saint Lucia. His experiences from living in the ex-British colony continues to influence his work—he infuses his poetry with the flavors of the African, Asian, and European cultures that are prevalent in the Caribbean lifestyle. His epic poem Omeros uses the spirit of Dante and the characters of Homer's The Iliad and The Odyssey to tell a love story set on Saint Lucia.

Walcott divides his time between Trinidad and Boston, where he teaches literature and creative writing.

If I fall into a grizzled stillness
sometimes, over the red-chequered tablecloth
outdoors of the Sweet Life Cafe, when the noise
of Sunday traffic in the Village is soft as a moth
working in storage, it is because of age
which I rarely admit to, or, honestly, even think of.
I have kept the same furies, though my domestic rage
is illogical, diabetic, with no lessening of love
though my hand trembles wildly, but not over this page.
My lust is in great health, but, if it happens
that all my towers shrivel to dribbling sand,
joy will still bend the cane-reeds with my pen's
elation on the road to Vieuxfort with fever-grass
white in the sun, and as for the sea breaking
in the gap at Praslin, they add up to the grace
I have known and which death will be taking
from my hand on this chequered tablecloth in this good place.
By Tressa Fancher