The Year of the Rabbit 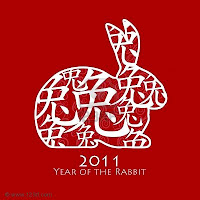 As we say farewell to the ferocious year of the Tiger, we hop into the placid and serene Chinese New Year of the Rabbit.
The most important of the traditional Chinese holidays, the festival begins on the first day of the first month in the Chinese lunar calendar and ends on the 15th day. The last day is called the Lantern Festival. Though not an official holiday in the United States, the Chinese New Year is celebrated with festivals in countries and regions with significant Chinese populations: China, Hong Kong, Indonesia, Macau, Malaysia, Philippines, Singapore, Taiwan, Vietnam, and Chinatowns elsewhere. It is a time for reconciliation, forgivness, and well wishes for peace and happiness.
According to mythology, the Chinese New Year emerged from a battle against a legendary beast known as Nian or “Year.” It would come on the first day of the new year to ravage crops, livestock, and children. Villagers began to place food in front of their doors at the commencement of each year to appease the beast, hoping it would prefer the feast rather than devouring the land and animals. One day, the people witnessed Nian frightened by a child wearing the color red. And so villagers began placing red lanterns, scrolls, ribbons, and other items on windows and doors. Firecrackers were also used to keep Nian away. Henceforth, the beast never returned to the village.
The Birmingham Public Library is proud to observe and honor this tradition by partnering with The Birmingham Chinese Festival Association (BCFA) and participating in the largest Chinese New Year celebration in Alabama. The Birmingham Chinese Festival Association began in 2005, when Scotty Colson of the City of Birmingham and Yue Li, the former president of the Chinese American Business Association of Birmingham (CABAB), met and discussed promoting the awareness of Chinese heritage in the area. The festival generated strong support from the Birmingham Chinese Association, the Birmingham Public Library, the Birmingham Museum of Art, and other institutions and organizations. It was an opportunity for the entire city to participate in celebrating this Chinese tradition.
“The First Festival was held in February 2006 and began with an outdoor dragon dance and fireworks at Linn Park. The parade led people of all ages to the Birmingham Museum of Art which hosted art activities, dance and music performances, children’s film, and acrobats. The Birmingham Public Library also hosted indoor events. The entire event was extremely successful, and well-received, bringing about 1,500 visitors to downtown Birmingham.” (BCFA)
This year, we celebrate the Year of the Rabbit on Feb 19th at the Boutwell Auditorium at 11am - 4:00 pm All are welcome to attend.
By Farah