Book Review: The Holy or the Broken: Leonard Cohen, Jeff Buckley & the Unlikely Ascent of “Hallelujah” 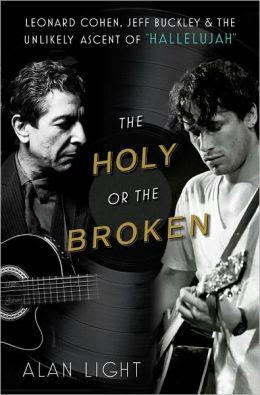 The Holy or the Broken: Leonard Cohen, Jeff Buckley & the Unlikely Ascent of “Hallelujah”
Alan Light

I’ve heard there was a secret chord
that David played to please the Lord
but you don’t really care for music, do you?
It goes like this: the fourth, the fifth
the minor fall, the major lift;
the baffled king composing Hallelujah!

Few songs in modern times have managed to capture the hearts and minds of millions the way that Leonard Cohen’s song “Hallelujah” has. Many first learned of it from a VH1 post-9/11 tribute featuring Jeff Buckley’s cover, while others learned of it when k.d. lang performed it at the Opening Ceremonies of the 2010 Winter Olympics in Vancouver. Hundreds of other artists have offered their versions including John Cale, Rufus Wainwright, Celine Dion, Bono, Chris Botti, Michael McDonald, Neil Diamond, Susan Boyle, and Bon Jovi to name just a few. The song has been featured in films such as Shrek (Rufus Wainwright) and The Educators and on popular television shows including The West Wing, The O. C., and One Tree Hill. Jeff Buckley’s and Rufus Wainwright’s covers are the most listened to on YouTube.

The song’s overwhelming popularity is ironic given that it languished in relative obscurity for two decades. Leonard Cohen wrote the words and music in the early 1980s for his album Various Positions, which his record label Columbia Records refused to publish thinking it was not commercial enough. Cohen published it himself in 1984 to poor sales and lackluster response. It took ten years for the song to find resonance with the public. Jeff Buckley began singing it at his concerts and included it on his 1994 album Grace. To this day many attribute the song’s authorship to Buckley. Many who are familiar with both prefer Buckley’s cover, yet both versions are excellent. Jeff Buckley’s death in 1997 at age 30 would cement his status as a legend and propel Cohen’s song to a larger audience. It would take a few more years for the song to mesmerize millions and reach its current ubiquitous zenith.

It seems impossible to classify “Hallelujah” into any genre of song. Since it invokes the Old Testament David in its opening verse, one might think of it as a hymn, yet the follow-up line in the same verse offers the flippant quip to the listener, “but you don’t really care for music, do you?” which is radically un-hymn-like. The next verse includes sexual overtones (references to the Biblical stories of David and Bathsheba, and Samson and Delilah) that one would not expect in a hymn. Many may not pay close attention to the words in the verses, but simply concentrate on the refrain that merely repeats the word hallelujah to a reverent sounding melody. The song’s subtle waltz rhythm moves the listener along to a state of exaltation. Perhaps it is not important to establish a genre. The power of the song can be overwhelming and for many it feels like a benediction – “the holy or the broken Hallelujah!”


The award –winning author Alan Light is no newcomer to musical writing. He is a previous editor-in-chief of both Vibe and Spin magazines and is a frequent contributor to the New York Times and Rolling Stone. He has written several full-length books on music and currently directs the public television concert series Live from the Artists Den. Here, in The Holy and the Broken he offers a rock and roll history from 1960 forward all based around a brilliant discussion of a song. Anyone who cares about contemporary music will be delighted by the myriad details concerning musical greats with whom they are familiar and whom they admire. (Did you know that the Cohens and the Wainwrights were neighbors and friends? Did you know that Leonard Cohen and Joni Mitchell were once engaged?)

My enjoyment of this book was further enhanced by listening to various renditions of the song while reading. Thanks to the collections of the Birmingham Public Library, its partnering libraries within our county and YouTube, there was much to choose from. There is even an Italian version of the song available (Il Divo, The Promise). All of the libraries’ items are available and can be reserved and routed to the pick-up location of your choice.

These CDs that include “Hallelujah” are available at the Central (downtown) location of the Birmingham Public Library.