Book Review: The Life and Times of the Thunderbolt Kid 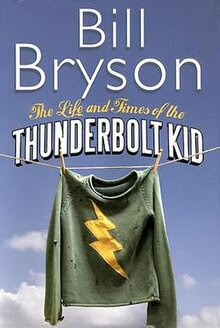 The Life And Times Of The Thunderbolt Kid
Bill Bryson

If you’ve read any of my past blogs, you know I have spasms over Bill Bryson’s books. I do go on a bit. Still, after reading and liking several of his titles, I’d put this one off. A memoir about growing up in Iowa in the fifties? I doubted even Bryson could sell that. Looking back, I’m puzzled by my hesitation. All I had to do was read one paragraph.

I quickly saw that, of all the times and places Bryson had traveled to, researched and written about, none was more exotic than his childhood. Des Moines at midcentury was a place where kids watched TV through their neighbors’ windows. TV was so rare, they didn’t care if they couldn’t hear the sound. Fear of polio was ever-present; to avoid contract, a magazine advised against “admitting new people to the family circle.” The nation’s top food writer, Duncan Hines, went to Europe, came home and told his fellow citizens they weren’t missing anything if they hadn’t eaten there. Food was bland. People liked it that way. Chain stores scarcely existed; each community had unique shopping. Parents let their kids run all over town. Parking lots were few in number. “It was a greener, quieter, less intrusive world,” concludes Bryson. Optimism was rife. “People were radiantly unsophisticated.” This is very much what I imagined Midwest life to be like then. This is not at all what I’d imagined. My view now of Middle America in the fifties has been smeared, blurred and contradicted by Bill Bryson. I now look at it with shock, dismay, dislike, admiration and not a little awe. The author makes it all plausible, real, tactile. Well, almost all of it. There’s some serious hype here, but that’s how kids saw things then, and still do. Bryson himself that the book’s true, “more or less.” The hype ultimately translates into the higher plain of exuberance, and this is one of the two blessings of Thunderbolt. The other is humor. It is funny as hell.

The humor mostly derives from the fact that Bill Bryson delivers in print what it feels like to be a footloose, fancy-free boy, a small anarchist taking on and artfully dodging the world. He does this better than any nonfiction writer I know. When dad threatens the little hellion with military school, Bill cleans up his act for a couple of days, but figures that, if worse comes to worst, he didn’t mind the notion of “being at a place where rifles, bayonets and explosives were at the core of the curriculum.” That gets at what it’s like to be a boy—it’s gangbusters. If anyone got in Bill’s way, he would adopt his ever-available alter ego, the Thunderbolt Kid, and “vaporize” them.

Though the book takes place in Des Moines, Bryson switches from it to the national scene many times to show us how closely his world mirrored the American one. Niceness, modesty, naïveté, obliviousness, paranoia, violence and conformity plays out on both levels. Of course, it couldn’t last. That many people couldn’t stay that sheltered forever. (Young Bill gradually discovers poor white people and, later, Negroes. These are shocking events for him, but he later adapts.) The contradictions of the Fifties would work themselves out in the Sixties. They still work themselves out. But, before they did, before the scales started to fall, this seeming utopia was all there for Bill the child to explore and blast his way through. He got up to more trouble than just about any kid I’ve come across. It’s a major miracle he grew up to write this, or grew up at all. He kept at least some of his vaporizing theoretical. I’m glad, and relieved, that this roller coaster didn’t crash and burn. Don’t hesitate to read it like I did.