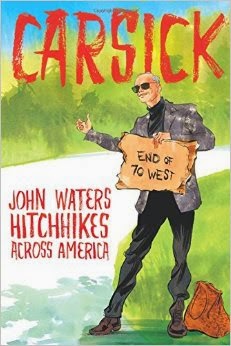 America’s leading chronicler of bad taste, and former Artist-In-Residence at UAB, John Waters has had a varied career. Best known as a filmmaker, he hasn’t been able to get his movies funded for many years. So he’s expanded his options. One of the most promising ventures is his return to writing books. Role Models (2010) was both killingly funny and deftly written. The land of bad taste can be treacherous, and Waters is a very discriminating guide. In his newest, Carsick, John Waters hitchhikes across America three times, twice fictionally and once non-fictionally. When he told his friends, they were mortified and warned him getting killed wasn’t a suave career move. But Waters, who’s hitchhiked since the Fifties, wouldn’t be disabused. He wasn’t a fool, though. He took a Blackberry, a GPS tracking device, and a packet of IDs proving he was writing a book on hitching and that he was a celebrity (at least to some). These would hopefully prove he wasn’t a nutter. He did in fact carry a sign saying that he wasn’t a psycho, but not one saying he was famous. He wanted it to be real. He found plenty of odd things on the road, including some found surrealism (sample roadsigns: RATTLESNAKES, PRAIRIE DOGS AND A SIX-LEGGED CAT; THE NUGGGET-FREE TRUCKERS-7 DAYS A WEEK).

But this is only the last third of the book. Part one is given over to an imagined best-case scenario, and it’s the highlight. The stone-faced official subject headings in the book itself make no mention of the fact that the first two sections are fictional, despite the fact that the author specifically mentions this in his intro. Maybe stone-faced is the wrong word, maybe straight man is. “The Best That Could Happen” is some of the most colorful, scabrous, zany, uninhibited, id-centered writing that John Waters has ever published. The section is divided into rides, and so these are closely linked short stories. One of the most memorable is a ride, Lucas, who takes Waters (or “Waters”) to a demolition derby’s Maniac Night. This is a sort of ultimate juvenile delinquent fantasy, with two “scary grease monkeys” Anteater and Doo-Doo contributing to a violent, anarchistic utopia in the heart of an unsuspecting Midwest. In a later ride, Waters’ old film cohort Edith Massey pops up alive (turns out she’d faked her own death). A sociopathic biker, a tour of “pirate truck stops,” a renegade librarian who distributes the worst in bad taste literature to eager patrons all across America, a “butch gila monster with a screw loose,” and a lift from Connie Francis (Waters offhand mentions that her Connie Francis Sings Jewish Favorites is one of his favorites; turns out I spied this CD at a local library bookstore and had a good laugh at the cover—will it be there when I go back?) are only some of the remaining spiffy rides.

“The Worst That Could Happen” doesn’t come off quite as good as the “Best” section, but it is, after all, up against a career peak for the author, namely section one. The rides here are from citizens who are far more transgressive and offensive than Waters, and that’s saying something. Fiction can do that. These drivers have lost all sense of proportion and humor, and then some. And then some. They inadvertently show that one secret to Waters’ style is he doesn’t lose his own perspective and humor.

The last portion, “The Real Thing,” is gritty and hopeful. Gritty, because he’s hitching for real. Hopeful, because almost all the rides are decent people who love their spouses and tell Waters this. As someone who’s spent a lifetime lampooning regular (and, more famously. irregular) Americans, this gives Waters pause and a new lease on life. Does this mean Carsick will be celebrated in the heartland media? Not so fast. This is John Waters. I couldn’t quote material from very large sections of the book for this blog, but then neither could Time, The New York Times, or anyone in the mainstream, and probably a good chuck of other media, too. Good as it is, I wouldn’t press Carsick on just anybody. But for the desperate, the jaded, the Young and the Restless and Mature Audiences, the exhausted and the odd, it may well do. It’s a little strange that the country’s former “comedy terrorist” has become one of America’s best humorist writers. I’m sure he’ll never become too respectable, despite his recent Lincoln Center honors. I’m just glad to have my education furthered. I always pick up new words with a Waters book, and now I know what “tweaker” and “patch money” mean. Carsick, in terms of taste, isn’t as low as those books given away by Bernice, the radical librarian. And that’s ok. It’s something more though. It’s better. Waters continues with his stride. Who cares if he’s not as threatening as he used to be? His last two books beat out his last few movies hands down. Pay attention. Or as Waters said in his Birmingham art show, Buckle Up.