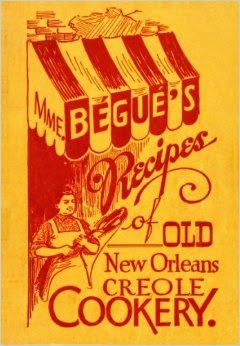 If you’re a fan of brunch or “second breakfast,” have a look through this cookbook and learn the history and recipes of one of the most famous restaurants ever to serve that meal. For many years in the nineteenth century, Bégués was an institution of New Orleans cookery and was famed for serving up “a Gargantuan feast that began at 11:00 o’clock in the morning and never ended until about 3:00 o’clock in the afternoon.” It would take a lot of walking through the Quarter to burn that off, assuming you could rise from the table afterwards.

The restaurant began as a coffee house under proprietor Louis Dutrey and at that time his wife, Elizabeth Kettenring, looked after the kitchen and was already turning out the kind of food that brought the customers in droves after they had finished their morning duties. When Dutrey died, Elizabeth married a butcher named Hypolite Bégué and by 1880 the restaurant, now named “Bégué’s,” was flourishing as a New Orleans institution and well on its way to being famous outside of New Orleans as well.

In her novel Saratoga Trunk, Edna Ferber has the heroine of the novel, the lovely and scandalous Clio Dulaine, indulge in breakfast at Bégué’s, where she divides her time between sampling the rich dishes and covertly eyeing the door to see if she has been followed by the handsome Texas cowboy Clint Maroon—all under the severely disapproving eye of her maidservant. “Yes! Burst your corsets! Stuff yourself!” With the restaurant offering selections like bisque of crayfish, veal omelets, shrimp and rice jambalaya, and floating islands with chocolate cream, it’s a mystery how any corsets in New Orleans survived this era.

Today the building that once housed Bégué’s is occupied by another restaurant, Tujague’s. Madame Bégué died in 1906 but many of her recipes have been preserved, to the good fortune of food-lovers everywhere. We are assured in this cookbook, by none other than Madame herself, that “the recipes herein given are original and of my own creation and are followed by me in the preparation of the dishes named.” You can’t ask for better credentials than that. Read, enjoy, and perhaps attempt to re-create these mouth-watering dishes. But before eating, be sure to remove your corset.