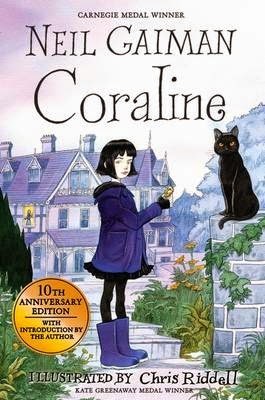 This time of year kids and parents are always looking for a spooky story. One of my all-time favorites is Neil Gaiman’s novella, Coraline. I think it’s the perfect Halloween read for (almost) all ages.

Coraline is a little girl who is bored and lonely. Her parents’ eyes are always glued to their computers. They have just moved into a new building in a different neighborhood, an old mansion divided into flats. Without a sibling or a friend to play with Coraline explores the creaky old building and finds companionship with the wacky neighbors. Coraline becomes acquainted with Miss Spink and Miss Forcible, two old ladies retired from show business, and Mr. Bobo, who is allegedly in the process of training a mouse circus. One rainy day when she is confined to the house, Coraline finds a peculiar door in her living room. Her curiosity is piqued when she opens the door to find the entrance bricked up. The neighbors all warn her to stay away from the mysterious door, but Coraline is a curious and stubborn soul, she has to investigate.

She opens through the door again and finds the brick barrier vanished. She follows the hallway into the Other World. She finds a flat much like her own with a family that is a lot like her family. Her Other Mother and Other Father bear a striking resemblance to her own parents, but there a few altered details. The most unsettling is that they have buttons sewn onto their faces where their eyes should be. For Coraline, it can almost be overlooked as the Other Parents are attentive and exciting. In fact, everything in the Other World is more interesting—her neighbors and toys are much more entertaining and she even meets a talking cat! However, all good things must come to an end and Coraline needs to go back into her real world. But the Other Mother offers Coraline a chance to stay forever. All she has to do is allow her to sew black buttons over her eyes. Obviously, this seems a very bad deal for Coraline, who flees in terror and makes it safely back to her side of the world.

There’s just one problem: her real parents. Coraline can’t find them anywhere in the apartment. She spends the next couple of days alone and afraid until she finds her family imprisoned behind the mirror. She correctly deduces that the Other Mother is behind this and she has no choice but to confront her to rescue her family. Coraline has to use her courage, wits, and help from a trio of ghost children (the Other Mother’s previous victims) to free her parents and the spirits of the children.

This book practically begs to be read aloud. Either by a parent or Neil Gaiman himself (the audiobook is fabulous!). It’s certainly horrific but in a way that will give kids a good dose of the creeps without keeping them up at night. The premise is certainly horrific. The thought of having buttons sewn over your eyes and your family spirited away is truly upsetting, but Gaiman’s clever writing keeps the tone lighthearted and it helps to take the edge off. I would recommend it for elementary school students at the youngest and it’s a great read for middle school, high school, and even adults. It is a creepy story for sure, so if you have a child in your family that scares easily you might want to try it first to see what it’s like.