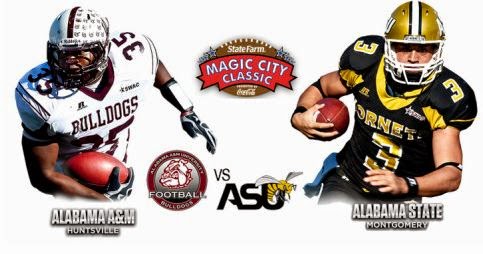 The Magic City Classic is an annual American football "classic" between  Alabama A&M University and Alabama State University, two of Alabama's most prominent historically black universities. The game is payed at Legion Field in Birmingham, and some of the festivities held in conjunction with the game include a parade and the "Battle of the Bands" between the two schools' marching bands.

In the early seventies, I had a memorable experience—one of excitement, curiosity and fascination. I was curious as to why my mother dressed me in my finest to sit outside in the frigid temperature, and excited to attend one of the most renowned HBCU (Historically Black Colleges and Universities) football games. It was formerly known as the "Classic,” but later the name was changed to the "Magic City Classic.” I was also excited by the number of people gathered at the Classic, or as some labeled it,  “The Fashion Show,” where they dressed in their finest consisting of long fur coats with matching hats, leather suits, and, leather gloves. The half-time featured performing bands and presentation of the homecoming court in beautiful dresses, long gloves, and tiaras. I was not fascinated with the football game itself, but I was fascinated by how family and friends bonded and the camaraderie of attending a HBCU game, even if they didn't attend either school.

Located in the center of the classic festivities is the Smithfield Library, (formerly the Booker T. Washington Library and the first library for blacks in the state of Alabama), a vital link and iconic landmark located in one of Birmingham’s most historical districts. Because the streets around the library are blocked off for the game, Smithfield library will close at 1:00 pm. on Friday, October 24, and will be closed on Saturday, October 25.

It's time for family, fun, and good food! See you next year!