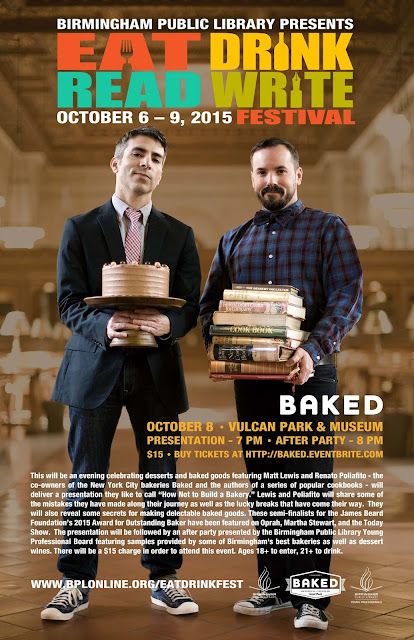 Birmingham has built a national reputation as home of many incredible restaurants, from fine dining to barbecue. On Tuesday, October 6, the Birmingham Public Library will shine the spotlight on food by hosting its fourth annual Eat Drink Read Write festival.

“The festival combines food, culinary arts, and literature in an engaging format focused on cultural enrichment and entertaining the public,” said Brandon C. Smith, the Eastwood Branch Library manager who is serving as coordinator of the 2015 Eat Drink Read Write festival.

This year the Birmingham Public Library is bringing the biggest names to take part in the festival: Matt Lewis and Renato Poliafito, co-owners of Baked, two New York City bakeries, and authors of a series of popular cookbooks. Lewis and Poliafito were semifinalists of the prestigious James Beard Award in the best baker category. They will highlight an evening celebrating desserts and baked goods on Thursday, October 8, beginning at 7:00 p.m., at Vulcan Park & Museum.

This year’s Eat Drink Read Write festival is unique in that each of the four nights of events are structured around the concept of a four-course dinner, Smith said. The three events being held at the Central Library in downtown Birmingham—Tuesday, October 6, Wednesday, October 7, and Friday, October 9—are free. The Vulcan Museum event featuring Baked’s Lewis and Poliafito has a $15 fee.

The schedule will be as follows:

“Main Course” – Food Stories
Wednesday, October 7, 6:00 -8:00 p.m., Central Library, 2100 Park Place, free admission
An evening of food stories told by people of varied backgrounds and different cultural traditions will take place at the Central Library. The stories will revolve around food memories such as making tamales with a Mexican mother, family dinners in northeast India, and a Jewish family’s love for celebrating the holidays with food. Samples of foods featured in the stories will be served. Local artist and stand-up comic Christopher Davis will host the free event.

During the “Dessert Course,” Lewis and Poliafito will deliver a presentation they call “How Not to Build a Bakery,” discussing mistakes they made along their journey to success and the lucky breaks that have come their way. Semifinalists for the 2015 James Beard Foundation’s award for Outstanding Baker, Lewis and Poliafito have been featured on Oprah, Martha Stewart, and the Today Show.

The Birmingham Public Library’s Young Professionals board is hosting a reception including wine and dessert samples following the presentation. There is a $15 admission fee to attend this event. Here is a link to a GQ article about Lewis and Poliafito’s third book, Baked: Elements:
http://www.gq.com/story/matt-lewis-renato-poliafito-of-baked.

Poets will compete in a slam for $500 in cash prizes while attendees sample beer, coffee, tea, and snacks.

“This event will be a great way to celebrate our food and culture in Birmingham,” Smith said. “I am pleased that we will be able to close out Eat Drink Read Write with our popular Bards & Brews poetry slam. This will be a great way for people to come together, visit the library, and learn more about the great restaurants and breweries we have here in Birmingham.”
By Tressa Fancher