Southern History Book of the Month: Experiment in Autobiography: Discoveries and Conclusions of a Very Ordinary Brain (Since 1866) 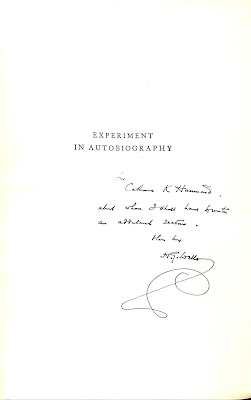 Experiment in Autobiography: Discoveries and Conclusions of a Very Ordinary Brain (Since 1866)
H.G. Wells

H.G. Wells is regarded as one of the major authors of science fiction and one of the most brilliant minds of his generation, famous even to the average man on the street because of the 1938 radio broadcast of War of the Worlds by Orson Welles and his Mercury Theatre Company. But did you know that H.G. Wells visited Birmingham, Alabama, in October of 1940? And that we have autographed works by Wells in the Birmingham Public Library’s Rare Book collection?

One of these works is his Experiment in Autobiography, in which he playfully (or perhaps seriously?) asserts that “The brain upon which my experiences have been written is not a particularly good one. If there were brain-shows, as there are cat and dog shows, I doubt if it would get even a third class prize.” Third class for the author of The Time Machine, War of the Worlds, The Invisible Man, and literally dozens of other works of fiction and non-fiction? If he’s third class, I’d hate to see where my brain would be assigned. The Experiment is an excellent demonstration of Wells’ sure touch with non-fiction; his account of his early life unfolds in an easy, anecdotal style that keeps you moving from one incident to the next—some comic, some gravely thoughtful about the events that shaped his character and habits, such as this description of a childhood injury and its aftermath:


My leg was broken for me when I was between seven and eight. Probably I am alive to-day and writing this autobiography instead of being a worn-out, dismissed and already dead shop assistant, because my leg was broken . . . I could demand and have a fair chance of getting anything that came into my head, books, paper, pencils, and toys—and particularly books.

I had just taken to reading. I had just discovered the art of leaving my body to sit impassive in a crumpled up attitude in a chair or sofa, while I wandered over the hills and far away in novel company and new scenes . . . My world began to expand very rapidly, and when presently I could put my foot to the ground, the reading habit had got me securely.

“The art of leaving my body . . . ” There can hardly be a better description of what it means to fall in love with reading. Wells’ ability to keep himself entertained through books was to stand him in good stead during his early days at a less-than-ideal school:


It is very difficult to give any facts about this dominie and his Academy which do not carry with them a quality of Dickens-like caricature . . . . there was something good about old Morley and something good for me. I have an impression that with a certain honesty he was struggling out of that tradition and trying to make something of us . . . Yet if I describe a day's work in that dusty, dingy, ill-ventilated schoolroom, there will not be a qualified teacher in the world beneath the age of fifty who will not consider it frightful.

Many of Wells’ best-known novels were written early in his career—The Time Machine, The Island of Doctor Moreau, The Invisible Man, and War of the Worlds were all published before 1900. But Wells wrote throughout his adult life on diverse topics such as biology, history, politics, and religion. In keeping with the premonitory tone of some of his science fiction novels in which he foresaw the horrors of modern warfare, he lived long enough to see both World Wars, dying in 1946 at the age of 79.

BPL has two autographed works by Wells in the Rare Book collection, one of which is dated October 24, 1940, so it is likely that he signed these books during his visit to Birmingham. For more on his Birmingham appearance:

Birmingham Rewound - This Month in History - October 1940
http://www.birminghamrewound.com/features/1940-10.htm
(Scroll down to see newspaper announcement on right)

To view Wells’ items in our Rare Book collection:
http://www.bplonline.org/locations/central/rare/