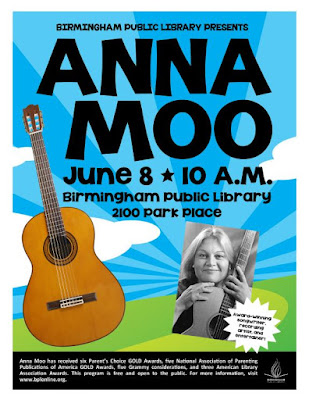 Anna Moo grew up on a sheep ranch outside of Sacramento, California. In the early '70s, she moved with her family to Chile and later Venezuela. In Chile Moo learned to play the guitar at the age of 11.

Upon returning to the United States, Anna began singing and performing professionally while in high school. She sang original songs in coffee houses and clubs in Florida, California, and New York City. After almost a half a decade living in New York City, she returned to the quiet countryside near Gainesville, Florida. She married entertainer Terry Moo, and they currently live on four acres of farmland in Newberry, Florida.

Anna Moo was inspired to write music for children after having two children of her own. Moo's first release; Making Moosic, was picked up by Warner Brothers Records and Music for Little People.

After the success of Making Moosic—a Parents Choice Gold Award, Best Recording of the Year by Parents magazine, and an American Library Association Award—Moo went on to create her own record label and produced and distributed her future recordings as Good Moos Productions.

Moo is dedicated to using music as a FUNdamental teaching tool in preschools and elementary schools. Her presentations are dynamic, multiculturally oriented, and always top notch educational entertainment.