Cahaba Lilies Are In Bloom 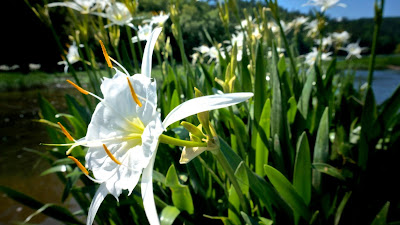 Every year around Mother's Day, the world's largest remaining stands of the Cahaba lily (Hymenocallis coronaria) burst forth into a stunning display of blooms. Each bloom lasts for one day before wilting and falling into water.

These lilies require a habitat that includes swift moving water, lots of direct sunlight, as well as the presence of the plebeian sphinx moth which pollinates the flowers and once allowed them to flourish in shoals in many of the rivers and streams of Alabama, Georgia, and South Carolina. The lily is currently listed as a candidate for protection under the Endangered Species Act.

The plant is known as the Shoal Spider lily or Shoals lily in other states and - historically - the largest stands could be found in the Black Warrior River before locks and dams were built to raise the water level for river traffic in the early 20th Century. I have heard that the stands of Cahaba lilies on the Black Warrior contained hundreds of thousands of blooms before the shoals of the river were flooded.

The sight of thousands of these blooms and sunlight sparkling on the river is one of the great displays of Alabama's natural beauty this time of year. The stands pictured below can be seen within the Cahaba River National Wildlife Refuge between West Blocton and Piper and are easy to access from a gravel road off of Bibb County Road 24 (so you should expect a lot of company while visiting on a weekend).

One of the best opportunities to learn all about the Cahaba lilies comes each year at the Cahaba Lily Festival on the third Saturday of May in West Blocton. There will be presentations, viewing trips, canoe trips with the Cahaba River Society, and vendors selling all manner of Cahaba lily merchandise.

However, if you want to have the river and the lilies to yourself, then take a trip down to the refuge early on a weekday morning. It is a forty five minute drive from downtown and is definitely worth seeing. 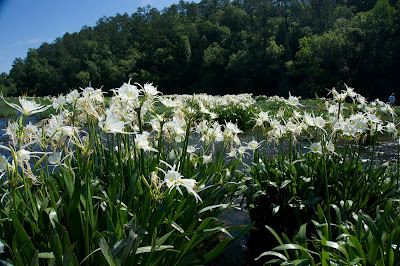