Southern History Book of the Month: Send the Alabamians: World War I Fighters in the Rainbow Division 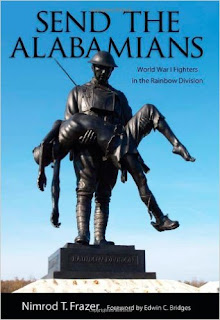 One hundred years ago, America was on the brink of its entry into World War I. Though our country’s involvement was not official until the declaration of war against the German Empire in 1917, there was already a feeling that our participation could not be delayed much longer. In Send the Alabamians, Nimrod Frazer traces the role of the 167th Infantry Alabama Regiment in the 42nd “Rainbow” Division and their exploits during WWI, starting with the Mobilization of the Alabama National Guard in 1916 in case troops were needed for fighting in Mexico. As Frazer points out, many young men saw enlistment as a valuable opportunity:


The Guard . . . suddenly offered young men to walk away from the simple lives that many had never been able to escape. Now they might travel to unknown places, eat healthy food, wear good clothes, and earn income for doing work that upright citizens respected and valued. Many young men without money, education, or training relished this new kind of work. It promised a better was to make a living than jobs that usually required long hours, often combined with sweaty, dirty, sometimes dangerous labor for little pay. Few Alabama men could rise above that kind of work, but some were intelligent enough and adventurous enough to take advantage of the opportunity to do so.

And take advantage of it they did, though it would lead to work more dirty and dangerous than any labor they had previously faced. Frazer follows the development of the regiment from its early days as the 4th Alabama until the War Department’s order in 1917 that changed it into the 167th United States Infantry:


On the day after the name-changing order, the Montgomery Advertiser announced that the 167th United States Infantry Regiment would become part of a new full-strength US Army Division, the 42nd, to be called the Rainbow Division . . . Major Douglas McArthur, who worked as the War Department’s press censor . . . described the unnumbered division as stretching like a rainbow across the United States. Building on this comment, a reporter called it the Rainbow Division, and the name stuck.

By early 1918, the Rainbow Division was in the trenches in France. Conditions were beyond hideous—as one recruit noted, “There is no mud like that of Lorraine”—but mud was the least of the horrors when compared to bad rations, lice, disease, and poison gas attacks. With little prior exposure to such adverse conditions, the Alabamians of the Division still performed with courage:


Most of the men in the 167th had been together for a long time, and they had been tested—and unified—by the epic march a month after their arrival in France. A bond of mutual confidence and understanding existed between officers and the men and from the men to each other. The 167th also exhibited a substantial amount of satisfaction in its identity as a volunteer unit belonging to the first National Guard division to see combat in the war.

Of course, all was not always peace and harmony—at one point, frustrated by the belligerent energy and brawling of some of the new recruits, General Edward H. Plummer was said to have exclaimed, “In time of war, send me all the Alabamians you can get, but in time of peace, for Lord’s sake, send them to somebody else!”

After this beginning that might tactfully be termed “inauspicious,” the Alabamians in World War I left behind a record of distinguished wartime service. The upcoming Memorial Day weekend would be a good time to read Frazer’s excellent history of the Alabamians of the Rainbow Division and pause a moment to pay our respects to those who gave their lives in war.

Do you have an Alabama ancestor in World War I?