YA Book Review: Carry On 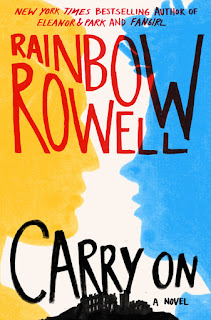 Remember how much Harry Potter and Draco Malfoy hate each other in the Harry Potter series? Imagine if they were forced to be roommates. Imagine if they were forced to work together! Now, imagine that, despite their intense mutual dislike, they’re both secretly crushing on each other! Now: put them into a situation that forces them to both work together, and confront their undeniable attraction. Now change their names from Harry and Draco to Simon and Baz, and you have Rainbow Rowell’s Carry On. That’s essentially what it is: a Harry Potter slash fiction rip-off. But oh, what a magnificent rip-off it is! Here’s the plot in a nutshell:

Simon Snow, an eighth-year student at Britain’s Watford School of Magicks, is the most powerful magician of his generation, and the one prophesied to defeat the Insidious Humdrum. His latest year at school isn’t going so well. His headmaster and mentor, the Mage, normally lets him in on his battle-plans against the Humdrum, but now he’s being all cryptic and leaving him out of the loop—despite the fact that Simon’s been fighting evil since he was eleven! To top that off, he’s losing touch with Agatha, his long-time girlfriend, and his evil roommate, Baz (who constantly plots against him) has mysteriously disappeared. That should be a good thing, right?

Well, maybe. Even with the Mage acting all mysterious, and his love life on the skids, Simon still can’t get Baz out of his head. What is that tosser up to? Is he off plotting with his aristocratic family to unseat the Mage? Preparing for the inevitable final battle for Watford? Or is it possible that Baz himself is in life-threatening peril?

Obviously, Carry On touches on a lot of what you’d find in Harry Potter, though it’s not as fast-paced as its source material. Rowell chooses the slow and steady approach, and manages to bring new meaning to old genre tropes. It’s also got fantastic characters, including Simon, who wrestles with the existential crisis of being “chosen” as much as he does the Insidious Humdrum; Penelope, his fiercely smart best friend; and Baz, an angsty anti-hero with enough snideness and dry wit to make him this year’s teen heartthrob. Carry On may be a rip-off, but it’s also more than that. It’s a funny, moving tribute to the British fantasy saga that made reading cool again. In the words of any fan-girl: it’s positively squee-worthy. Recommended for Ages 16-Up for some language and some suggestive material.