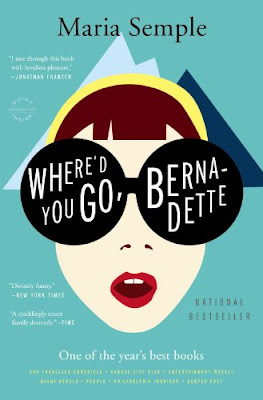 I rarely use the word "delightful" in a book review, but that's what comes to mind after listening to this book about depression and some possible mental illness that somehow manages to be somber and hilarious at the same time. Where'd You Go, Bernadette? by Maria Semple is told through e-mails, letters, receipts, and official documents, a writing style I normally avoid like the plague because of how it chops up the flow of the story for me. But there is a reason that the story is told mostly through correspondence, and we see it come full circle as the mystery is revealed at the end.

Misanthropic, agoraphobic Bernadette Fox moved from California to gloomy Seattle when her husband, Elgie Branch, a Steve Jobs-type tech guru and "fourth-most-watched TED talk ever" superstar, got a job working at Microsoft on Samantha 2, a secret project that entails slapping a transmitter strip on one's forehead and typing an e-mail from a recliner across the room. Their 14-year-old daughter, nicknamed Bee because her name is too difficult to pronounce, spent a lot of her childhood in the hospital because of a heart condition. But she's intelligent, creative, and precocious, and more adept at handling her mom's quirky—and, let's be honest here, vengeful—personality than her father or anyone else can.

Bernadette at first appears to be a stay-at-home mom with simply too much time on her hands and a big chip on her shoulder about the yuppie mothers at Bee's private school. She calls the mothers "gnats," and her disdain for these women causes all kinds of trouble at the school and in the community. Some of the funniest moments happen when Bernadette goes up against the gnats (at one point while listening to this on my commute, I was laughing so hard I couldn't see to drive), but then a series of events that includes a ruined school fundraiser and the stress of an upcoming trip to Antarctica puts Bernadette on a collision course with everyone in her small, dull life and scatters the wreckage far and wide.

There are so many laugh-out-loud moments in Where'd You Go, Bernadette?, but just as many tender moments that will have you in tears. This story about how people aren't as terrible—or as great—as you imagined once you get to really know them for the first time, is a wonderful celebration of the eccentrics and misfits that make the world so much fun.

And, if you get the chance to, please listen to this on audio. Movie actor Kathleen Wilhoite made this story with her exuberant Bee voice, her cynical Bernadette voice, and her excellent take on every other voice in between from the calm personal assistant Manjula Kapoor to the eager-beaver room mother volunteer Audrey Griffin.