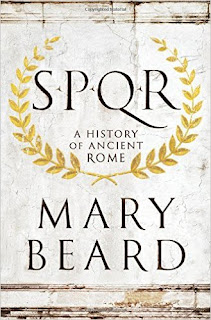 I’ve always looked askance at "revisionist history." I mean, if a history is good enough for Livy, Suetonius, and Gibbon, it should be good enough for the rest of us, right? To be more honest, I don’t want to be confronted with the possibility that what I learned in school was actually closer to myth, or worse, propaganda. So I stick with the traditional interpretations, but if anyone could change my taste in history, it’s Mary Beard.

Mary Beard is a professor of classics at Cambridge. You may know her for her popular blog, A Don's Life, which is available through the Times Literary Supplement webpage. SPQR is a revisionist history, but a revisionist history without any particularly slant or bias. She covers the era of 63 BCE to 212 CE. (And yes that’s a lot of years to cover in a mere 536 pages, but her entertaining tales make the pages fly by.)

Beard begins her work not with the mythical beginnings of Romulus, Remus, and the mama wolf, but in 63 BCE with the legendary Catiline Conspiracy. On one side of the conspiracy was its architect, Catiline. He was a bankrupt aristocrat turned demagogue who promised the Roman poor that the only possible way to erase their unpayable debts was revolution. On the other side was Cicero, a young, ambitious senator. Catiline’s method of debt forgiveness was definitive—he planned to murder all Roman senators and burn the city itself to the ground. In the process, of course, his debts would also go up in smoke.

Cicero saved the republic by uncovering the secret plot, foiling an assassination attempt, revealing incriminating letters, and turning the girlfriend of one plotter into a double agent. He even discovered a house “stuffed with weapons” for Catiline’s revolutionaries to use on innocent senators. The justifiable highlight of this heroic tale is Cicero standing on the floor of the Senate denouncing Catiline in a series of historic speeches. After the final speech, Catiline made a futile attempt to prove his innocence. The Senate was not swayed by his words. Under cover of darkness, he ran to the outskirts of Rome to take refuge with his ragtag army of dissolute aristocrats and rebellious paupers. In a few weeks the Legions arrived on the scene, Catiline was killed in battle, the mob was dispersed, and peace restored.

Cicero basked in the glory of having saved the Roman Republic. His fame lives on today. For centuries the educated have considered Cicero’s works to be a model teaching tool, and his denunciations of Catiline to be the gold standard for persuasive public speaking. One of his speeches, the first Catilina speech, begins with the words “Quo usque tandem abutere, Catilina, patientia nostra?” (How long Catiline, will you go on abusing our patience?) This Roman question has become a question for all ages and all nations. Beard includes a photograph of a Hungarian crowd protesting a politician’s attempt to rewrite their constitution. A man in the crowd is defiantly holding a sign proclaiming "Quo usque tandem." The photograph was taken in 2012. And there’s one of Beard’s many lessons. While our senators may not literally stab each other, politicians really haven’t changed that much. Can’t you hear today’s Democrats and Republicans asking each other “How long (fill in the blank), will you go on abusing our patience?”

But Beard doesn’t simply carry the story to the present. She digs deeper into the past to reveal different shades and colors to the story. These colors in turn create different pictures of the incident. She allows the reader to determine for themselves which picture is vivid and which is shadowy.
Cicero and Catiline were, in fact, fierce political rivals. Cicero won a seat in the Senate the same year Catiline lost his seat. Cicero was by no means impoverished, but he came from the country. He made his money by using his golden tongue in the Law Courts, and as a slum lord. (Beard explains that he once joked “more out of superiority than embarrassment that even the rats had packed up and left one of his crumbling rental blocks.”)

Catiline, on the other hand, came from nobility. He could trace his family line back to the great war against Rome’s arch enemy Hannibal. Indeed, his forbear “was the first man known to have entered combat with a prosthetic hand—probably just a metal hook that replaced his right hand, lost in an earlier battle.” Catiline had been the personification of Roman nobility.

In the parlance of the day, Cicero was definitely a “new man.” Was Cicero playing the part of a revolutionary by reaching above his station in Roman society? Was Catiline simply trying to maintain the status quo and save his vision of Roman society? If so, did Cicero respond by denouncing the former senator in order to secure his newly won seat?

Then, like today, politics was an expensive business. Moreover, if a candidate for the Senate lost his bid for a seat, he was not reimbursed. Family fortunes were lost and made in the senate races. Catiline himself had fallen on hard times. Perhaps, Beard asked, his revolution was simply an attempt to win back his family fortune.

Most disturbingly, she asked if Catiline was ever truly guilty of any crime. Was denouncing a former senator as a revolutionary simply a way for Cicero to secure political capital as the savior of the Republic? Sallust, a later Roman historian said, the orator had “turned the troubles of the state to his own glory.” Can armed mobs, attempted assassinations, and weapons caches really be described as mere "troubles"? Is Sallust hinting at fabrication on Cicero’s part?

Perhaps Catiline was not trying to violently erase his own debt, but instead attempting to introduce radical economic reform to ease the burden of the average Roman. “There was the enormous disparity of wealth between rich and poor…and probably for much of the time, even if not starvation, then persistent hunger.” Did Catiline see himself as the savior of Rome?

I found SPQR mesmerizing. The book spans the time of the Roman kings to Emperor Caracalla, and presents a clear synopsis of the rise and fall of the Republic. Throughout Mary Beard turns her gimlet eye to every major event of Roman history to reveal not just vivid facts, but a gallery of hazy possibilities hiding behind those facts. SPQR doesn’t read like revisionism, it reads like thought-provoking history.