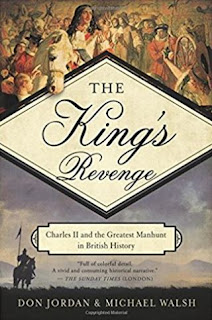 In history class our teachers taught us about the great men behind great events. These are men represented by marble busts and court portraits in museums and galleries. We learned about Julius Caesar invading Britain, King John at Runnymede, and Winston Churchill and the Battle of Britain. Beneath this picture is the word "corrupt" or "moral," beside this statue the word "frivolous" or "serious," and this portrait is labeled "vengeful" or "forgiving." As students, most of us for the sake of simplicity tended to accept these facile labels presented by our professors. However, sometimes a study of the small events following the great reveals a more complex figure. The King’s Revenge by Don Jordan and Michael Walsh is one such study.

On the 30th of January, 1649, King Charles I of England was in the name of revolution decapitated by Puritans and members of Parliament. In time Oliver Cromwell took control and, in the eyes of some, took the throne as well. Many Englishmen and Parliamentarians began to feel they had simply exchanged one tyrant for another. On September, 1658, Cromwell, the man who had overthrown the monarchy “… survived myriad battles, intrigues and assassination plots…was laid low by an insect” and died of malaria. Minus his authoritarian hand, England seemed, at best on the verge of another civil war, and, at worst, slipping into anarchy. So-called Committees of Safety popped up overnight like poisonous mushrooms. Attempted military coups became common. Religious persecution was on the rise. The Rump Parliament stumbled about incapable of grasping the reins of power. Even Oliver Cromwell’s son Richard, the obvious choice for the throne, simply walked out the palace back door without warning. Suddenly, restoring the Monarchy seemed the only path to control, stability, and sanity. On May 8, 1660, Parliament invited Charles II, the son of the monarch they had killed, to return from exile and assume the throne of England, Scotland, and Ireland.

Professors usually portray Charles, "the Merry Monarch,” as a bon vivant uninterested in the past,
and living only for the moment. (Particularly if the moment included wine, women, and song.).

Charles was applauded for the terms of his return. He spoke of restoration of property for victims of the revolution, religious tolerance for all, and critically, a general pardon for all revolutionaries. But there was another darker side to the young monarch not often discussed in the classroom. Before he even sailed from exile back to England he wrote “…we shall therein by all ways and means possible endeavor to pursue and bring to their due punishment those bloody traitors who were either actors or contrivers of that unparalleled and inhuman murder.”

A list, consisting of only seven "exceptions" to the general pardon, was written. The men on the list would be punished for their part in the execution of Charles I. Then five more names were added to the list. Then eight. Then ten. In the blood thirsty atmosphere created by Charles II, it was inevitable that Parliament and those in the new court added even more names to the list. It was equally inevitable that bribes were offered, and accepted, to keep names off the "excepted" list.

There were three types of justice for the regicides. They could be punished with death. In most cases, this entailed partial hanging, followed by disemboweling, and ending with drawing and quartering. A lesser punishment meant they would be bankrupted, their entire wealth seized by the Crown. Or they could receive minor punishments with accompanying minor fines, and live out their lives in comfortable obscurity. Some observers concluded that “the king’s motives…were partly revenge and partly rapine, in other words the royal seizure of the estates of those who were accepted” from the general pardon.

When England was emptied of the regicides spies, kidnappers and assassins were dispatched across the globe to bring the guilty to face the King’s justice. It didn’t matter to Charles II if his father’s murders were hiding under beds in English attics or under straw in a Massachusetts Bay Colony barn. Even a London grave provided neither sanctity nor safety. Oliver Cromwell, long since dead, was disinterred and his head displayed as a warning. The King’s reach extended everywhere—even beyond death.

Jordan and Walsh crack the marble statue of Charles II to reveal a man of many sides: some flippant and bright like a Restoration ball, but others as desperately dark as a Tower cell. They also show that even peace has a price.
By Tressa Fancher