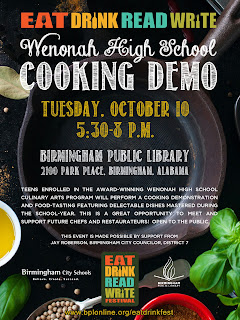 During the event students involved in the culinary program will show off their cooking skills by performing a demonstration and food tasting of delectable dishes they have mastered during the school year.

The Wenonah High Culinary Arts team members, all seniors, performing the cooking demo at the Central Library will be: Asia Tatum, Jordan Young, Drusilla Foster, Juahmun Sturgeon, Janiya Wright, Aaron Harris, and Alejandro Guzman. Another member of the team, Tytianna Day, will help serve attendees. The students will demonstrate a fruit salad with honey dressing, cinnamon sweet potatoes, and a chicken vegetable stir-fry. Attendees will get samples and recipes to take home.

On October 2 students in the Wenonah High Culinary Arts Program visited the nearby Powderly Branch Library to research books on food to prepare for the cooking demo. They also stuck around for storytime and prepared healthy snacks for young patrons.

All ages are welcome. Free admission.


The award-winning Wenonah High School culinary team will be featured October 10 at 7:20, 7:50, and 8:20 a.m. on JehJeh Live on Good Day Alabama (Fox 6) about the free cooking demo they will be performing for the public at the Central Library.
By Tressa Fancher